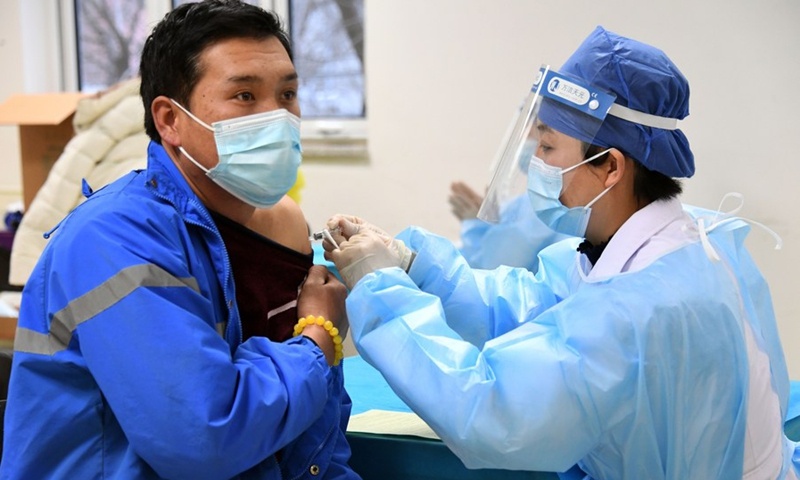 A medical worker inoculates a recipient with a COVID-19 vaccine at a temporary inoculation site in Haidian District in Beijing, capital of China, Jan. 11, 2021.(Photo:Xinhua)

Officials and experts said the instances were rare and do not reflect the big picture, but it reveals management problems in some local governments that need to be alert. They stressed that the country's principle is to encourage those in need to get vaccinated while respecting their wishes.

China is taking an approach of "getting the people who need it vaccinated and pushing forward vaccination in stages," and as of Saturday, the country had administered 164.47 million jabs, making it the second-fastest country in the world in terms of mass vaccination, according to the press conference.

However, NHC spokesperson Mi Feng noted that "Some places adopted inappropriate measures, including a 'one-size-fits-all' or 'compulsory for all' approach, which needs to be corrected."

Wu said that in order to push forward the mass vaccination campaign, some places have not taken appropriate measures, though the situation is not widespread, and this reflects a lack of organization and management.

In the latest case, officials from the township of Wancheng in South China's Hainan Province revoked a controversial COVID-19 vaccine inoculation notice which claimed that people who are not vaccinated would be banned from public transport and entering public venues such as restaurants and supermarkets. "We sincerely apologize for the improper way that we mobilized vaccination," reads a statement released by the local government.

However, some foreign media reports exaggerated these rare cases and attempted to smear China's incentives to promote vaccination by interpreting it as "a campaign prompting a backlash among residents," and that some are "being forced" to receive vaccinations.

Interviews with people who did not get vaccinated conducted by the Global Times showed they did not get a shot either because they are not eligible due to age or health criteria, or they believe the virus is far away from them and there is no need to be vaccinated as China is safe enough.

Many of those who have been vaccinated said they did not feel "forced" to get a shot and they believe getting vaccinated and protecting themselves and others from the coronavirus is good for all.

According to estimates from disease control experts, vaccination coverage would need to reach 70 to 80 percent of a population for herd immunity, which in China means about 900 million to 1 billion people would need to be vaccinated.

Some media said Chinese residents are unwilling to get a shot because they do not trust the safety and efficacy of Chinese vaccines.

Citing a report on the results of a study recently released by the University of Chile, AFP reported that CoronaVac is 56.5 percent effective in protecting recipients two weeks after the second dose, and 27.7 percent effective within the first two weeks. But for a single dose, efficacy in the 28 days between the first and second dose was only three percent.

The report cited by many foreign media as proof that Chinese company Sinovac Biotech's COVID-19 vaccine does not provide enough protection. However, the Global Times learned from a source close to the matter that it cannot represent the vaccine's real efficacy in Chile, as it is based on limited open data and is "not even close to being a research paper."

Liu Peicheng, director of Sinovac Biotech's public relations department, said at Sunday's press conference that Phase III clinical trials in Brazil, Indonesia, Turkey and Chile showed that the number of COVID-19 cases is far smaller in the vaccination groups than in the placebo groups.

So far, Chinese vaccines have been approved for emergency use for dozens of countries and regions.

"The protection rates of all vaccines in the world are sometimes high, and sometimes low. How to improve their efficacy is a question that needs to be considered by scientists around the world," Gao Fu, director of the China's CDC, told the Global Times on Sunday.

"In this regard, adjusting the vaccination process in terms of the number of doses and intervals and considering sequential inoculation of different types of vaccines might be possible options," he said.