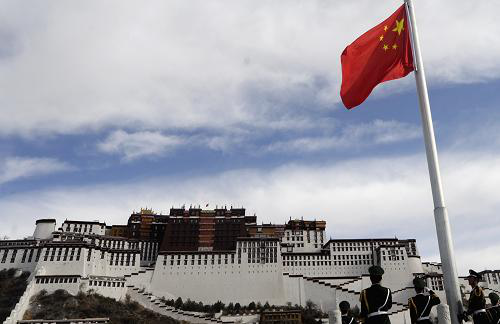 BEIJING, Dec. 20 (Xinhua) -- China's National People's Congress (NPC) expressed strong indignation at and firm opposition to the United States on its signing into law of the Reciprocal Access to Tibet Act of 2018, said a statement issued by the NPC Foreign Affairs Committee Thursday night.

The act, which smears the opening-up policy of China's Tibet and fanfares to take a discriminatory visa policy towards related Chinese officials in the so-called "reciprocal principle," is against the basic norms of international relations and a gross interference in China's domestic affairs, said the statement.

It has sent a seriously wrong message to "Tibetan independence" forces, the statement said.

Stressing that Tibet affairs are purely China's domestic affairs and allow no interference from other countries, the statement said China's Tibet and Tibetan areas in the other four provinces are open to people from around the world.

Since 2015, the number of visitors to Tibet and these regions from the United States alone has reached nearly 40,000, including multiple delegations of US Congressmen received by the NPC, it said.

Meanwhile, taking into consideration factors such as Tibet's special geographic and climatic conditions, the Chinese government has taken certain administrative measures in accordance with laws and regulations for foreigners to enter Tibet, which are totally necessary and give no ground for blame, the statement said.

The act's accusations against China disregard the facts and are full of prejudice, and completely unacceptable by the Chinese side, it said.

"If the US side implement the act, it will definitely cause serious damage to bilateral relations including exchanges between legislative bodies of both countries, and China will take forceful measures to resolutely safeguard its own interests," said the statement.

China's door to the outside world will open wider and wider, so will Tibet, it said, adding that China welcomes more foreigners to visit, travel and do business in Tibetan areas.

The policy will not change. However, the prerequisite is that China's law and related regulations must be strictly abided by and necessary procedures must be carried out, it said.

The US side should also take effective measures to eliminate adverse effects brought by the act and not to implement the act in order to avoid severely impairing China-US relations and bilateral cooperation in key areas, the statement said.