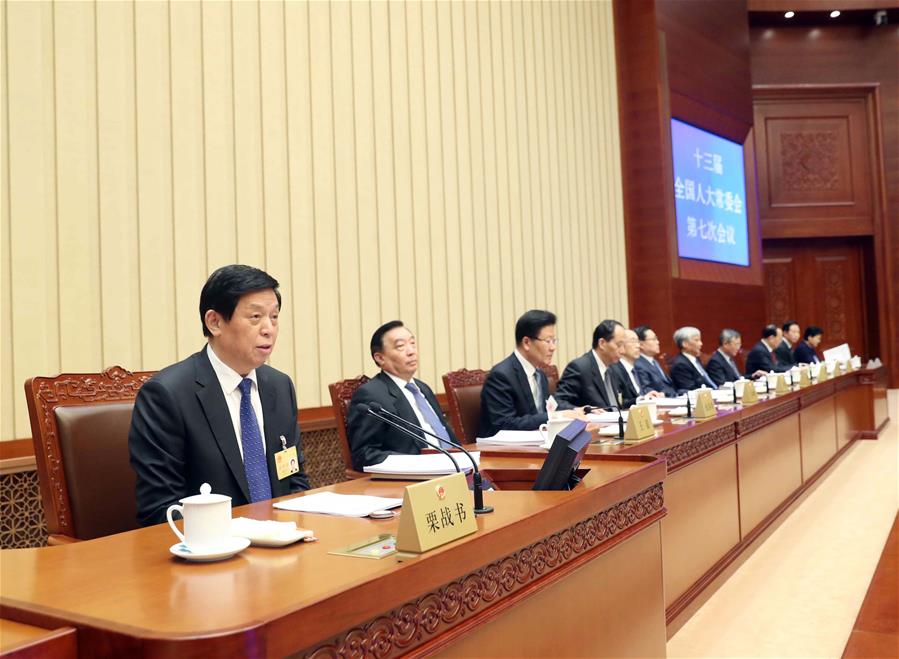 BEIJING, Dec. 29 (Xinhua) -- The Standing Committee of the National People's Congress (NPC) closed its bimonthly session Saturday, adopting a revised law on contracting rural land and arrangements on the NPC's annual plenary session in 2019, among others.

Presiding over the closing meeting, Li Zhanshu, chairman of the NPC Standing Committee, highlighted that about one-third of the subjects covered in this session were closely connected to China's reform.

He stressed the standing committee's duty in implementing reform and ensuring that all major reform measures are taken in accordance with the law. He also called on the NPC and its standing committee to perform due diligence to improve the NPC system and the performance.

Before the closing meeting, Li presided over a chairpersons' meeting of the NPC Standing Committee.

At the closing meeting, lawmakers voted to adopt revisions to the law on contracting rural land to better protect the rights of farmers who have migrated to urban areas.

In addition to revisions to the civil servant law, a package of revisions on 17 laws, including the Product Quality Law and the Electric Power Law, were also adopted to facilitate institutional reform and improve the government's service.

A decision on the second annual session of 13th NPC was adopted at the closing session, which set March 5, 2019 as the starting date of the annual session.

Moreover, lawmakers approved the extension of a trial project in 33 county-level areas concerning the adjustment of laws related to the use of rural land and authorized the State Council to speed up local government bond issuances before the approval of the annual fiscal budget.

They also ratified the Shanghai Cooperation Organization Convention on Countering Extremism and approved five reports on the handling of NPC deputies' bills during the March session.

During the weeklong bimonthly session, NPC Standing Committee deliberated a number of newly submitted drafts, including the draft foreign investment law, draft sections of the civil code and draft revisions to the patent law.