Head of China's top political advisory body Wang Yang on Saturday attended and addressed the opening ceremony of a dragon boat racing in Uganda, calling on closer culture exchanges between the two countries. 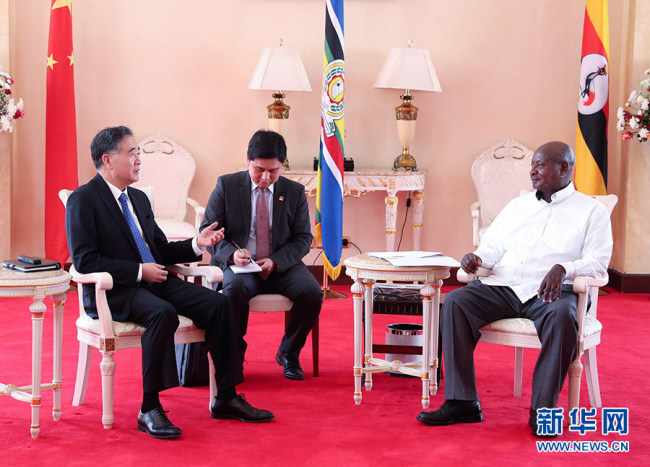 The second Ugandan dragon boat racing, co-hosted by the Chinese People's Association for Friendship with Foreign Countries and the China-Africa Friendship Association of Uganda, was held at the Uganda Wildlife Conservation Education Center in the southern city of Entebbe.

Wang, chairman of the National Committee of the Chinese People's Political Consultative Conference, told the opening ceremony that China and Uganda have actively held a diversity of cultural exchange activities in recent years, constantly consolidating the foundation of public will over the China-Uganda relations.

He concluded a four-day visit to the eastern African country on Saturday.

Dragon boat racing is a traditional folk activity held during China's Dragon Boat Festival, which will fall on Monday this year, Wang said, adding that the dragon boat competition in Uganda will again write a vivid story about the friendly exchanges between the two peoples.

Dragon boat racing embodies China's national spirits of helping each other when staying in the same boat, hardworking, seeking harmony while allowing diversity, working in unity and cooperation, braving winds and waves, as well as pressing forward with indomitable will, he said.

These are also the spirits that the Ugandan and African people have, he said, noting that the friendship and cooperation between China and Uganda and China and Africa also require these spirits.

China and Uganda should firmly stand together like dragon boat teammates, and understand, support, cooperate with each other and move forward towards a common goal to make the China-Uganda relationship more flourishing, said Wang.

For his part, Ssekandi said that Uganda is the first African country that holds dragon boat racing during celebration of the Dragon Boat Festival.

The competition, integrating the two countries' traditional culture elements, is highly welcomed by the Ugandan people, and is a symbol of the two people's unity, he said.

As the friendly relations between China and Uganda are consolidating and deepening, the two countries will have more cooperation in fields of people-to-people exchanges, sports and tourism, he said.

The first dragon boat racing in Uganda was held in May, 2017, marking the first time that the culture of the Chinese Dragon Boat Festival enters into East Africa.

The activity this year continued to be held on Lake Victoria, Africa's largest lake and the world's second largest freshwater lake, where 27 teams from China and Uganda participated.

Cultural activities such as flying kites, making Zongzi, a typical food of the Dragon Boat Festival, and Chinese waist drum performance and Ugandan folk dance will also be held during the race.