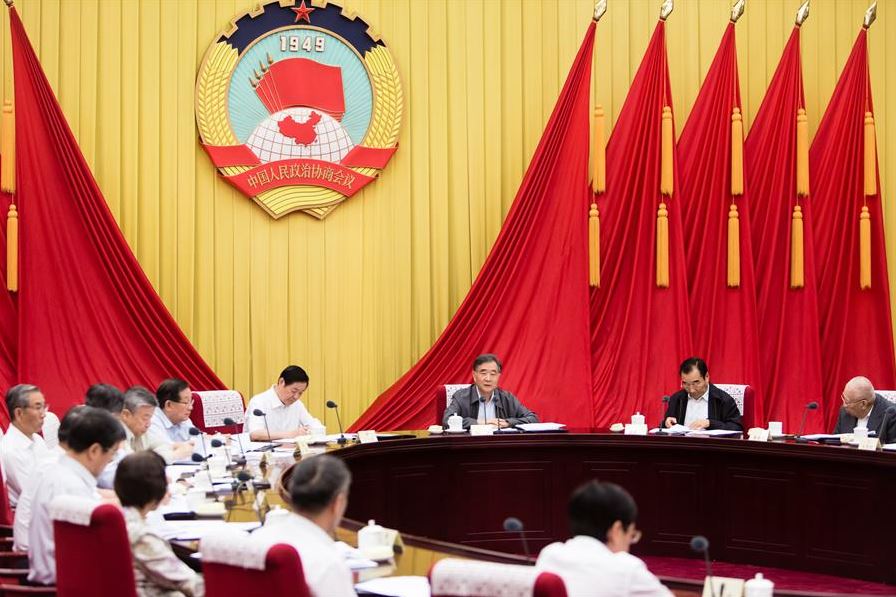 Wang Yang, member of the Standing Committee of the Political Bureau of the Communist Party of China (CPC) Central Committee and chairman of the National Committee of the Chinese People's Political Consultative Conference (CPPCC), presides over the seventh chairman and vice chairpersons' meeting of the 13th CPPCC National Committee in Beijing, capital of China, July 25, 2018. At the meeting, the chairman and vice chairpersons held a group study about reforms since the 18th CPC National Congress in 2012. (Photo: Xinhua/Liu Bin)

The decision was made at the seventh chairman and vice chairpersons' meeting of the 13th CPPCC National Committee presided over by Chairman Wang Yang, according to a statement issued after the meeting.

At the meeting, the chairman and vice chairpersons held a group study about reforms since the 18th National Congress of the Communist Party of China (CPC) in 2012.

Members of the CPPCC should further study and understand the policies of the CPC Central Committee, conduct field studies on difficult reform issues and provide constructive advice, Wang said.

Being a united front organization that have connections in all sectors of the society, the CPPCC should play a better part in explaining the policies to the public, reducing misunderstanding, soothing dissatisfaction, settling disputes and enhancing consensus, he said.

At Wednesday's meeting, draft revisions to working protocols of the CPPCC National Committee were adopted and will be submitted to the Standing Committee meeting in August.

The drafting and revision of various regulations will lay a solid institutional foundation for the innovation and development of the CPPCC, Wang said.

The chairman and vice chairpersons also adopted a decision to revoke the membership of Zeng Zhiquan in the CPPCC National Committee, which will be submitted to the August meeting for final confirmation.

Zeng is under investigation by the CPC Central Commission for Discipline Inspection (CCDI) and National Supervisory Commission for "suspected serious violation of Party disciplinary rules and law," according to a CCDI statement on July 11.