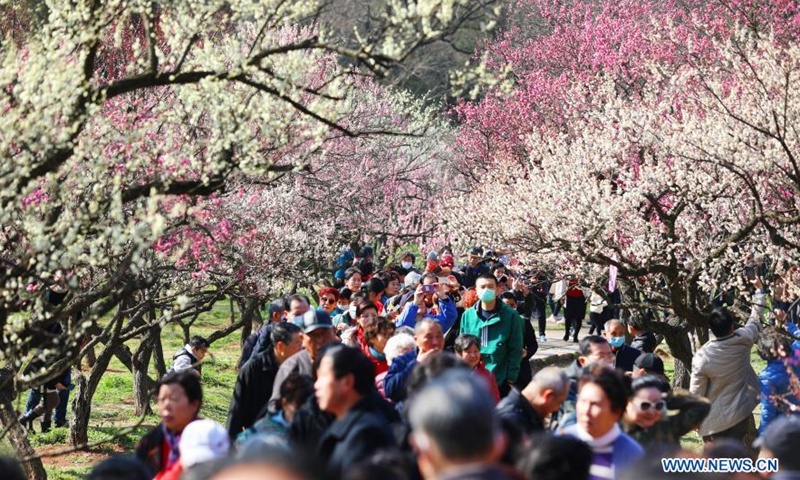 Starting March 16, people can travel freely by train across the country with a green health code, which indicates a good health record, and will not need to present a negative nucleic acid test certificate, the Global Times learned from the customer service operator of the railway authorities on Sunday. Airports in some cities have implemented the same policy, according to media reports.

Economic experts said the easing of travel restrictions and the increasingly positive epidemic situation with an accelerated rate of nationwide vaccination from March to May will significantly promote the flow of people and boost tourism and services industries.

"It is estimated that tourism and services industries will rapidly resume growth in the second quarter, with a double-digit year-on-year growth," Cong Yi, a professor at the Tianjin University of Finance and Economics told the Global Times Sunday. He added that the secondary and tertiary industries on the whole will see rapid growth compared with the same time in 2020.

Data for Q1 of 2021 has not come yet but for Q4 in 2020, tourism industry dropped 33 percent year-on-year and tertiary industry increased 6.7 percent year on year.

"In addition to a better epidemic situation, this year also marks the beginning of the 14th Five-Year Plan (2021-25) with a lot of projects set to roll out. The further easing of travel restrictions will lead to a significant increase in production and commercial activities," Cong said.

The first domestic travel peak will come during the upcoming three-day Qingming Festival holiday, which falls on the first weekend of April.

According to Qunar, a Chinese online travel agency, hotel bookings for the Qingming holiday had increased by at least 4.5 times year-on-year as of Thursday, according to media reports.

He said that the easing of cross-provincial travel restrictions will boost domestic tourism.

People who were unable to travel during the Chinese Spring Festival holiday due to coronavirus restrictions are also expected to take advantage of the Qingming break to visit their families, which will boost travel numbers.

Wang Peiyu, a deputy head of Peking University's School of Public Health, told the Global Times on Sunday that the epidemic situation in China will continue to see a clear and stable trend due to the long period of zero local infections and the increasing number of people getting vaccinated.

The Chinese mainland has not seen a single locally transmitted COVID-19 case for 27 days after the local cluster outbreaks in North China's Hebei and Northeast China's Heilongjiang and Jilin provinces were successfully brought under control before the Chinese Lunar New Year.

COVID-19 vaccinations have been rolled out across China, with more than 52 million doses administered as of February 28.

Chinese authorities vowed to ramp up efforts to vaccinate 560 million people, or 40 percent of China's population, by the end of June.