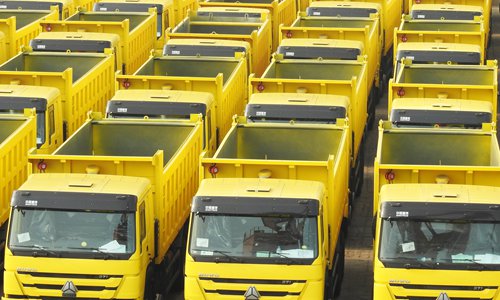 Trucks to be exported overseas are lined up at Lianyungang Port in East China's Jiangsu Province. (Photo: VCG)

The US was China's third-largest trade partner in the first eight months, accounting for 12 percent of China's total foreign trade volume.

The declining proportion of China-US trade in China's overall trade volume, from a high of 14.2 percent in 2017, shows the diminishing leverage Washington has over China's economy amid the trade war, experts said.

China's total trade volume with the US fell 9 percent to 2.42 trillion yuan ($340 billion), compared to an 8.1 percent fall during the January-July period. China's trade surplus with the US expanded 7.7 percent to 1.33 trillion yuan from January to August, according to data released by the General Administration of Customs (GAC) on Sunday.

Although the trade surplus expansion with the US narrowed from the first half of the year's 12 percent, and 11.1 percent in the first seven months, Chinese experts said that the escalating trade war is hurting US importers, producers and consumers more than their Chinese counterparts.

The further expansion of the trade surplus even after the US has taken all means available to tackle it shows that the US market has rigid demand for Chinese goods, and they can't find substitutes in the short term, Chen Wenling, chief economist with the China Center for International Economic Exchanges, told the Global Times on Sunday.

Top negotiators from the world's two largest economies are set to meet in early October for their first face-to-face talks since August, according to China's Ministry of Commerce.

Chinese experts warned that if the US persists with its trade bullying, further countermeasures from China will be necessary, which will escalate the current impact on US producers, especially agricultural producers.

The dramatic fall in China's imports from the US, especially agricultural products like soybeans and pork, which only account for a limited proportion of China's total consumption volume, has been a body blow for US farmers.

Amid US President Donald Trump's tariffs, US farm bankruptcies and even suicides among farmers have risen, US media reports said.

Further economic and social problems in the US could be caused, and US politicians who persist with trade bullying need to take responsibility, Chen said.

Although the decline in China's foreign trade in August shows the downward pressure on China's economy in the third quarter, experts noted that China's economy and trade are more resilient than in the US, and can cushion the impact from the trade war.

China's trade with other major economies has been rising. The US was overtaken by the Association of Southeast Asian Nations (ASEAN) and fell to third place in the first half of 2019.

Yin Jianfeng, a researcher with the Chinese Academy of Social Sciences, told the Global Times on Sunday that China has stressed that its economy and that of the US are highly intertwined and both play important roles in the world economy.

"The resilience of China's economy and trade is stronger than in the US, enabling China to deal with an escalating trade war better than the US," Yin said.

Once the US loses its trade connection with China, it will be hard for the US to turn back again, Chen noted, adding that the US is digging its own grave.

China's trade with countries and regions along the Belt and Road Initiative has grown faster than average, and its trade with major markets like the EU, ASEAN countries and Japan kept growing in the first eight months.

China's trade with the EU was up 9.7 percent to 3.15 trillion yuan in the first eight months.