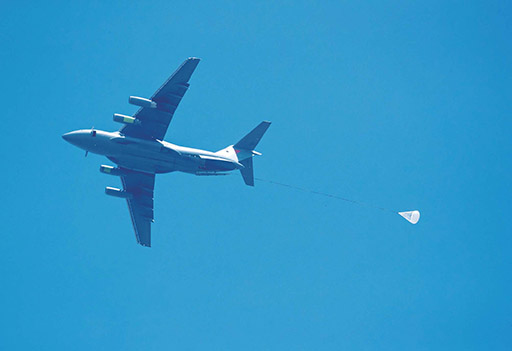 The PLA Air Force's official micro-blog account had previously released similar news on May 8, and this post by AVIC is more like a confirmation. However, the photos released by the AVIC indicate that the aircraft has now conducted heavy equipment airdrop training, which was not concluded in the previous report.

Military experts say that heavy equipment airdrop tests are of great significance to the PLA airborne troops in improving their combat capability, since airborne troops are consistently a “trump card” in real battle.

The term “heavy equipment airdrop” refers to airdropping heavy weapons and equipment weighing over one ton. It’s essential for the remote maneuverability and fire assault capacity of modern airborne troops.

The Y-20 is able to airdrop an eight-plus-ton ZBD-03 airborne armored infantry fighting vehicle (IFV). The aircraft is designed to carry multiple airborne combat vehicles and airdrop heavy-load equipment. However, further drills are needed to test such capability.