The head of Chinese travel giant Trip.com, Jane Sun, is on a mission to propel women through her workforce, spearheading novel approaches such as encouraging babies on business trips and free egg freezing. 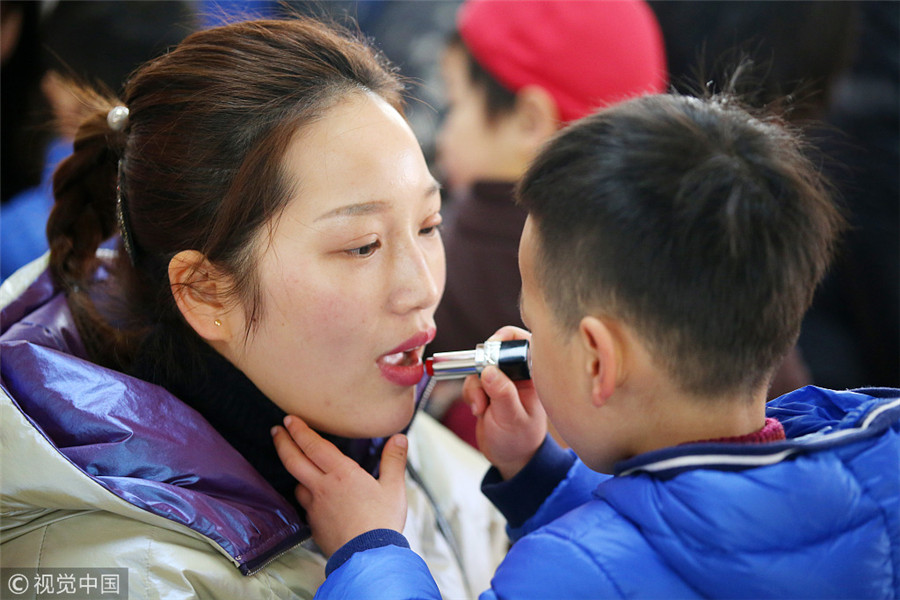 A boy applies makeup on his mother at a kindergarten in Nantong, East China’s Jiangsu province, March 6, 2019. (File photo: VCG)

As a working mother, she understands the challenges faced by many women in China, whose participation in the labour force has been falling for decades.

She runs China's largest online tourism agency and is one of the country's business elite: a Silicon Valley returnee who moves in friendship circles with the likes of Alibaba founder Jack Ma and has the ear of the government.

But as well as moving the business to new markets globally, Sun is also looking closer to home for growth.

She wants to drive female representation across the 45,000-strong Trip.com workforce, including efforts to accommodate breastfeeding mothers by inviting them to take their babies along on work trips and introducing nursing rooms.

Staff benefits include flexible working, free taxis for pregnant employees, and offering staff the option of freezing their eggs -- funded by the company.

"I think we are really taking the leadership, and that pays off," she said, with female representation at middle management level now 40 percent and one-third at executive level.

"That number is even better than most of the companies in the Silicon Valley," Sun said in an interview with AFP.

Sun became chief financial officer at Trip.com -- then known as Ctrip -- in 2005, and chief executive officer in 2016.

In that time the group has morphed into an international site in 19 languages with 300 million registered members.

The company's gross revenues grew 30 percent year-on-year in 2018 to 725 billion RMB ($103 billion), tapping into the appetite for travel among millions of China's newly-rich middle classes.

Chinese tourists made 149 million overseas trips in 2018, with total spending of $130 billion, according to the China Tourism Academy.

Trip.com is also working with the government on how to improve China's appeal for tourists so they don't just think of "pollution and piracy".

Sun said an official, coordinated campaign akin to regional neighbour's "Incredible India" could be in the works.

"Perhaps we can say 'Friendly China' with a panda -- something that speaks to people," she said.

A law major from one of the country's top universities, Sun was among the first students to be given passports and sent abroad to study in the late 1980s amid paramount leader Deng Xiaoping's opening of China.

"My father's generation didn't even know what passports were -- we were very lucky," she said.

After graduating, she headed to an emerging Silicon Valley where she worked for two decades, along with her husband, John Wu, one of the architects of Yahoo's search engine.

They decided to return to China in 2000 after Wu was offered a role as chief technology officer at "a very small company called Alibaba" -- the tech giant that just listed in Hong Kong for at least $11 billion.

Accustomed to battling for senior positions herself, she has turned her attention to encouraging female staff at Trip.com to "be more confident".

"At the year end (the staff) who come into my office asking for a raise and a promotion are always male," she said.

"But (for women) I have to go out to them and say, you did a wonderful job, I think you should go through this process."

Just over nine percent of directors in listed companies in mainland China are women, according to Deloitte's 2019 Women in the Boardroom report, while only 10 women are part of the 204-strong Communist Party central committee.

Sun said part of the challenge is getting more women in decision-making roles.

"I think you always start with the top," she said.

"If in the management team or on your board there is no female representative, it's very hard for male leaders to be aware of lots of challenges females are facing."