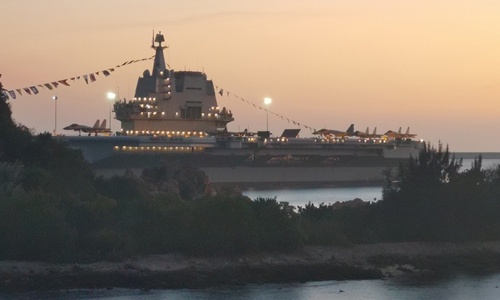 The moves aimed to test the equipment's performance and troops' training results, and boost their capability to carry out missions, Senior Colonel Tan Kefei, a Defense Ministry spokesperson, said at a regular press conference.

Media reported earlier this month that the Shandong, China's second aircraft carrier, embarked on a training voyage in the Bohai Sea starting September 1, and the Liaoning, China's first carrier, was spotted leaving its base and sailing in the Yellow Sea, also in early September.

This was the first time that the general public came to know that China had two active aircraft carriers out at sea for apparent simultaneous exercises.

The exercises and trials by the two aircraft carriers also sparked panic on the island of Taiwan, as the military on the island feared a potential island encirclement patrol by the two carriers, Taiwan media reported at the time.