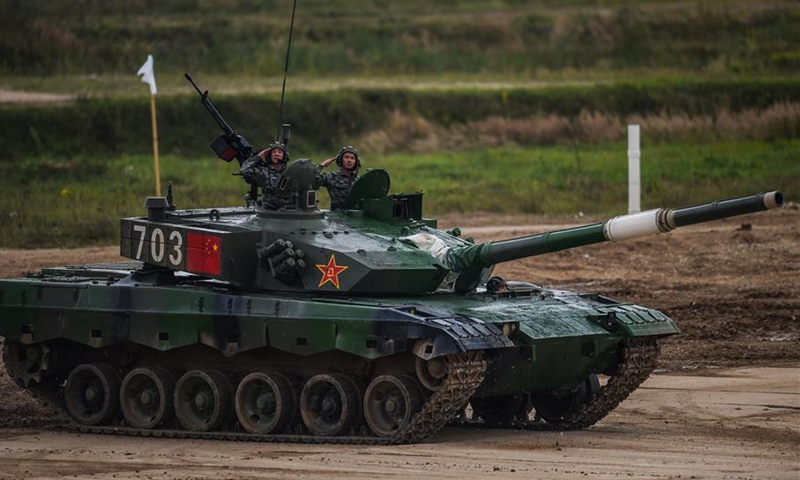 Chinese team takes part in the tank biathlon's singles during the International Army Games 2020 in a suburb of Moscow, Russia, Aug. 30, 2020. (Photo: Xinhua)

Designated to participate in the International Army Games, China's Type 96B tank came with several new features this year that are expected to help the Chinese team reach good results at the ongoing competition, media reported.

The tank biathlon contests of this year's International Army Games kicked off in Moscow, Russia on Sunday with the Chinese team using the Type 96B tank, China Central Television reported on Monday.

Compared with the Type 96B tank that participated last year, the current version has a smaller storage room on the sides of the turret, making it thinner and less likely to hit obstacles which could affect the results, Beijing-based magazine Tank & Armoured Vehicle said on its social media account.

It also added a fume extraction device on the top of the turret which can extract carbon monoxide from the tank and protect the crew from intoxication, the magazine reported, noting that the commander's panoramic sight was also upgraded to provide a larger field of view.

According to the magazine, more than 100 modifications were made to the tanks.

Although the Type 96B has not entered PLA combat service yet, its participation in the games can inspire new upgrades and provide a good testing ground for new technologies and concepts, a military expert who wished to remain anonymous told the Global Times on Wednesday, adding that the experiences gained in this competition could be used in the development of future equipment.