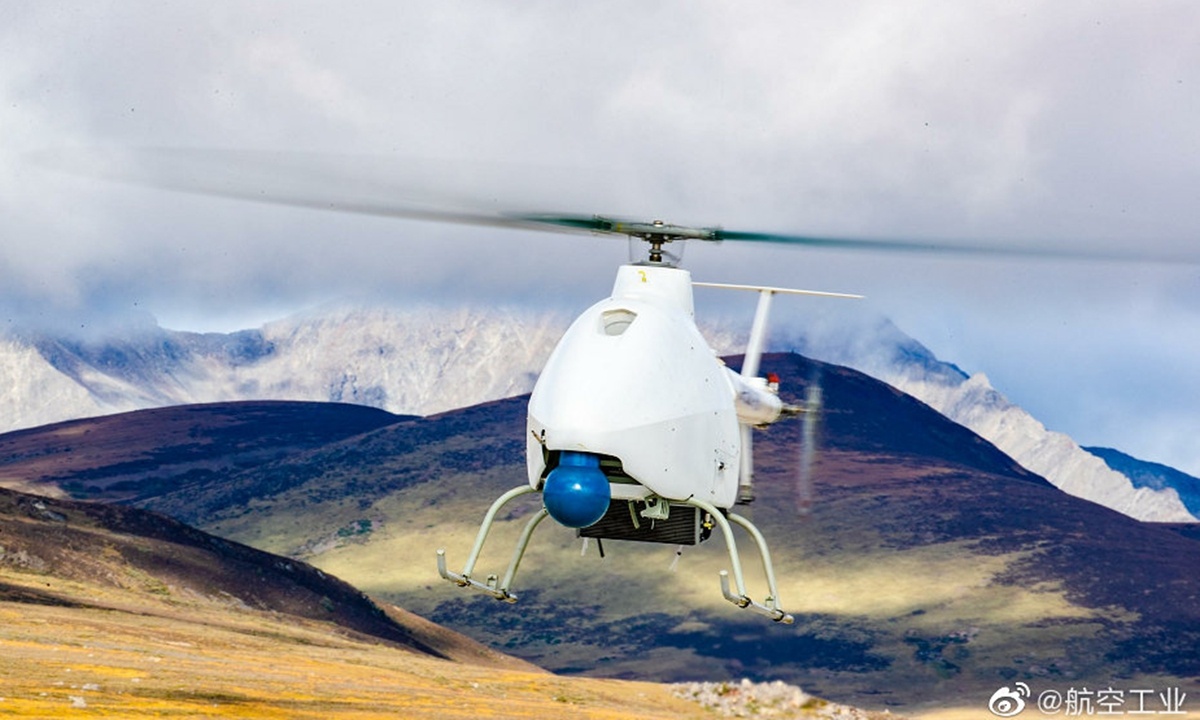 An AR-500C unmanned helicopter makes a test flight at the Daocheng Yading Airport in the Ganzi Tibetan Autonomous Prefecture of Southwest China's Sichuan Province, on Sunday. (Photo: Screenshot from the Sina Weibo account of AVIC)

China's first independently developed unmanned helicopter that will focus on plateau operation successfully completed its maiden flight in a plateau region on Sunday, a milestone that demonstrates the capability of this agile drone. The aircraft is expected to join missions in the high-altitude China-India border region including logistics support and armed reconnaissance amid tensions, analysts said on Monday.

The AR-500C prototype completed its first plateau flight at the Daocheng Yading Airport, which is the world's highest civilian airport with an elevation of 4,411 meters, the state-owned Aviation Industry Corp of China (AVIC), the aircraft's developer, said in a statement on Monday. This flight broke the record for the elevation at which a domestically built unmanned helicopter took off and landed.

During the 15-minute flight, the drone completed a series of tests including climbing, hovering, rotating and other operations maneuvers, before steadily landing, AVIC said.

This demonstrated the AR-500C's general ability to fly in all types of terrain, showing that its development has made significant progress, the company said.

A separate AVIC statement released in May, when the AR-500C made its maiden flight in a low-altitude region, said that the drone will be used in missions including reconnaissance and communication relay, with optional functions including electronic disruption, target indication, fire strikes, cargo delivery, and nuclear radiation and chemical contamination reconnaissance.

The Sunday's test flight showed that the AR-500C can carry a payload of 80 kilograms and fly for more than five hours at an altitude of 4,411 meters. This means that in a plateau rescue mission, with only one flight, it can deliver life-saving food for one day to more than 30 people, Zeng Guogui, the chief designer of the aircraft, was quoted by news website jstv.com as saying on Sunday.

The first plateau flight of the AR-500C comes at a time when China and India have been engaged in border tension at high elevations since May.

In its biggest military logistics operation in decades, the Indian Army has rushed weapons, fuel, food and winter supplies to the border region to maintain combat readiness through the treacherous winter that lasts about four months, Indian media outlet oneindia.com reported on Monday.

To maintain logistics support in the difficult plateau terrain, the Chinese People's Liberation Army (PLA) has adopted drones, including using them to deliver food, water and medicine.

The AR-500C could be a powerful addition to PLA arsenal, as it is expected to carry heavier payloads, have longer endurance, fly higher and be more versatile than the drones currently in service, a military expert who asked not to be identified told the Global Times on Monday.