China's mass vaccination campaign has entered the fast track with its daily inoculations leaping from 1 million to nearly 3 million within a week. Experts expected China's overall inoculation rate to surpass 10 million per day, putting it on target to administering vaccines to 40 percent of the population. 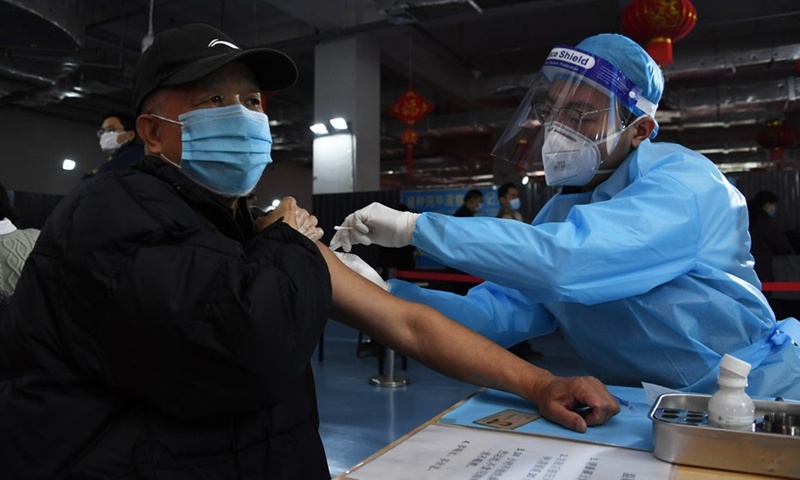 A resident is inoculated at a vaccination site at Yongdinglu Sub-district of Haidian District in Beijing, China, March 14, 2021.(Photo: Xinhua)

Vaccines produced by China have been given to more than 100 million people at home and abroad, proving that the vaccine is safe and effective. In the next step, China will accelerate the promotion of free vaccination for the entire population, from high-risk and key people to the general population, making it the "largest-ever centralized vaccination program," the Joint Prevention and Control Mechanism of the State Council, China's cabinet, announced on Wednesday.

According to the newest data, China has administered 82.84 million vaccine doses against COVID-19 as of Tuesday, up from 74.96 million by Saturday, which is equivalent to 2.62 million doses per day.

Comparing the data released on Saturday with that from March 14, the total inoculation number was 64.98 million, meaning the daily number of doses across the country was about 1.5 million.

China's National Health Commission has been releasing the national inoculation data every day since Sunday. Previously, the commission only reported the number at press conferences, which were usually held weekly.

The Global Times learnt from a source that China, at a mobilization conference held by the State Council on Monday, set itself the vaccination target of covering about 40 percent of the population by around June, which means that the daily inoculation number will jump to about 10 million doses.

As part of efforts to accelerate vaccination across the country, the source told the Global Times that China is set to expand the number of vaccination venues from 20,000 to 50,000.

In comparison, the US has administered 128 million doses as of Tuesday morning and its current average daily vaccination doses is about 2.49 million, Bloomberg reported, making its daily administration rate slightly lower than China's current 2.62 million doses. At this pace, the US will take another five months to cover 75 percent of the population, Bloomberg reported.

India, which had dubbed its vaccination drive the biggest in the world, had only administered 50.075 million doses since January, and its daily vaccination was only about 2.173 million doses as of Tuesday, both The Hindu and Bloomberg reported. The figure lags far behind its high expectation of inoculating 300 million people, or nearly one quarter of the population, by July.

Tao Lina, a Shanghai-based vaccine observer, told the Global Times that China's inoculation speed is expected to experience a bell curve, meaning the rate could be slow in the beginning and faster later on, before it drops slowly. The daily inoculation rate nationwide has the potential to peak at about 15 million doses, as China is capable of creating a miracle when the whole society pools its strengths to bring about mass vaccination, he said.

China previously saw its highest vaccination rate with measles immunization from September 11 to 22 in 2010, when an average of 10 million doses per day were administered and 100 million people were given jabs in just 10 days, according to Tao.

That measles vaccination drive in 2010 was mainly organized by the country's disease control system, and focused on children and primary and secondary school students, while China's COVID-19 vaccination campaign will be a national effort mobilizing the whole of society, which means there is a good chance of achieving the set goal.

Besides, China's production capacity can fully meet the demand of the entire country, even though vaccine producers have yet to reach their full capacity.

The Global Times learnt that Chinese pharmaceutical giant Sinopharm could expand its annual COVID-19 vaccine production to 1 billion doses and CanSino Biologics could produce 2 billion to 2.5 billion doses at full capacity this year.

Quality and safety have always been put first in vaccine production and supply, Xiao added.

Based on the efficiency of vaccination in some Western countries, countries with larger populations are generally planning to complete mass vaccination by the summer or autumn of this year and restart human and economic exchanges in the second half of the year, Chen Xi, an assistant professor of public health at Yale University in the US, told the Global Times.

Chen underlined China's urgency in speeding up mass vaccination, explaining that when countries achieve herd immunity and the flow of people starts to resume, China's quarantine policy will have a negative impact on the economy.

To meet the target, the Global Times found that many regions have sought methods to increase the public's willingness to get jabs.

Since Wednesday, Beijing's Daxing district has been providing shopping coupons for people who have received two doses of COVID-19 vaccines. The total amount of coupons exceeded 200 million yuan, and every vaccine administered can earn coupons with a nominal value of up to 30 yuan at five local shopping mall branches.