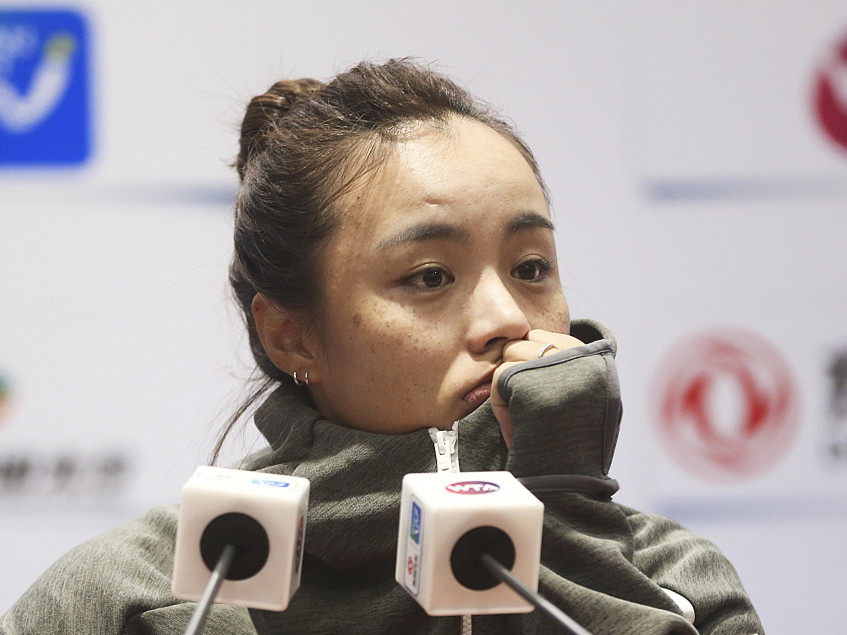 WUHAN, Sept. 28 (Xinhua) - Wang Qiang's hopes of becoming the first ever home finalist in the Wuhan Open were dashed here on Friday, after she retired with injury while trailing 6-2, 2-1 in her semifinal against Estonia's Anett Kontaveit.

Wang started the match brightly, breaking Kontaveit's serve to race into a 2-0 lead to the delight of the home crowd on center court. However, that was as good as it got for the Tianjin native, who appeared to be struggling physically once Kontaveit assumed the lead in the set.

Trailing 5-2, Wang requested a medical timeout, and had more athletic tape applied to the upper part of her left thigh. But the Chinese continued to struggle in the second set, and despite rallying to break Kontaveit's serve, the 26-year-old appeared visibly distressed and ultimately had to retire.

Speaking after the match, Wang said that she had been struggling to remain in peak condition. "From the third day [of the tournament], my left leg didn't feel very good. Despite all the bandages, my leg still felt very painful when I was stretching and running."

Wang, who has taken on a punishing schedule in recent months, having competed in more than a dozen matches in the past three weeks and coming off the back of the Asiad. It remains to be seen whether Wang's injury will prevent her participation in next week's China Open in Beijing.

In defeating Wang, Kontaveit got a slice of history, becoming the first Estonian to reach the final of a Premier 5 tournament. "It's my first final this year. Of course it's really exciting. My first final in such a big tournament, it's definitely special," said the 22-year-old, who also commiserated with Wang after the game. "I told her I'm sorry that it had to end this way. I really hope she gets better. I really felt for her today."

Both players appeared to be well-matched out of the gate, with each serving out their games until a Barty break allowed her to run up a comfortable 5-3 lead that saw her on the verge of sealing the opener.

It appeared that Barty, who is known for building up early leads and using them as cushioning for her agile (but often risky) full-court play, was keeping her opponent on the defensive, and up to her old tricks. But her fast-paced, full court game worked against her in this match with several of volleys finding nothing but net.

Her opponent held serve and eventually pulled level at five-all, breaking the Australian after fighting her to deuce. Although Barty was able to force a tie break, she could not overcome the superior shooting from the Belarussian and lost it handily.

Barty was broken in her first service game of the second, and it was clear that the momentum was tilting quickly toward her opponent. The Belarussian fired six aces on the way to winning the second set.

Sablenka noted that she managed to warm up and find her serves against Barty as the match wore on.

"At the beginning of this match, I didn't feel my serve. She was serving really well. Actually didn't know what to do on the court," she said. When there was nothing to lose, when she was leading 5-3, then I started to play well. (I had) nothing to lose. I just tried to put her serve in. It worked."

In doubles, Elise Mertens of Belgium and and Demi Schuurs of the Netherlands took out Shuko Aoyama of Japan and Lidziya Marozava of Bulgaria 4-6, 6-2, 10-3.

The match started with both pairs serving out their games until a Aoyama/Marozava break tilted the momentum toward their end of the court.

Mertens/Schurs overcame shaky shooting at the outset (they suffered two double faults but managed to save four of their six break points) through considerable strength on return.

Mertens/Schuurs came out of the gate in the second with a break at 15:40, and they kept the rhythm throughout the rest of the proceedings, never facing a break point and going on to force a tie-breaking third set which they summarily won.

They will face the winners of Friday's late match between the pairing of Anastasia Pavlyuchenkova and Anastasija Sevastova and the Czech duo of Andrea Sestini Hlavackova and Barbora Strycova.