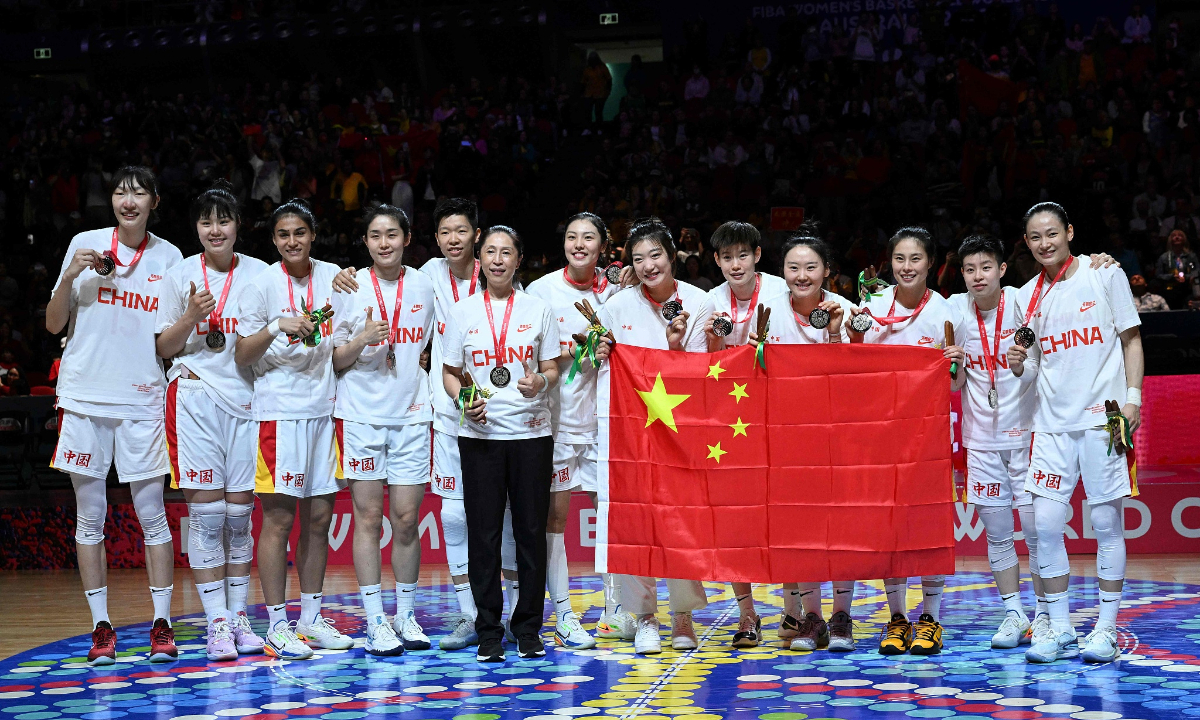 China's women's basketball team won respect and encouragement from Chinese netizens for their sportsmanship demonstrated in the gold-medal game against Team US in the FIBA Women's Basketball World Cup on Saturday, after finishing in second place.

The Chinese team lost 61-83 to the US team in Sydney on Saturday. However, finishing as runner-up equaled the Chinese team's best previous result at the World Cup in 1994. The Chinese women's basketball team finished sixth in the 2014 and 2018 games, respectively.

In Friday's semi-final, China defeated host Australia 61-59 and entered the World Cup final for the second time in almost three decades. This is a significant achievement for a team with an average age of less than 26 years old.

The Chinese team won six times in this year's World Cup before Saturday's final. The only defeat was it lost 63-77 to the US during the group stages.

With the absence of top scorer Li Meng, China showed a strong desire to fight until the last minute in the final in the face of the world's top-ranked US women's national basketball team. Team China's guard Wu Tongtong, for example, had to be carried off the court and leave the game in the fourth quarter after her knee was injured badly driving to the basket. Wu helped the team score 13 points in the game.

After the final, the 22-year-old Chinese player Han Xu of China's women's national basketball team was selected into the team of the tournament All Star Five. Han appeared, on average, for 21.9 minutes on the court in each game and averaged 12.4 points, 8.4 rebounds, and 1.8 blocks per game. Zheng Wei, the head coach of Team China, was named the best coach of the 2022 FIBA Women's Basketball World Cup.

The gold-medal game between China and the US which coincided with China's National Day was hotly discussed on Chinese social media. The hashtag #China's women's basketball team vs US women's basketball team topped China's Twitter-like social media platform Sina Weibo during the game, with more than 500 million views and over 70,000 posts under the topic as of press time.

However, in this final, the Chinese women's basketball team did not give up easily, which touched the hearts of Chinese netizens.

Although losing the game, the team was met with praise and encouragement from Chinese netizens as people have walked away from a "medal-oriented" mentality, and started to embrace more the spirit of sportsmanship and "perform your best" spirit.

Many Chinese netizens said they were proud of the players for trying their best and fighting until the last minutes which demonstrated the true sportsmanship.

The mental strength and quality of the Chinese women's basketball team are even more valuable than being the runner-up in the World Cup, they said.

The Chinese women's basketball team is already the champion in our hearts, commented an internet user Chen Haoran.

It is the best gift for the National Day holiday and I feel so proud of you, commented another netizen known as KLZD.

"We should admit the gap in the strength between the two teams. However, the women basketball players have presented an exciting game, playing good defense and never hesitating to attack. I am so proud of them," said one Weibo user known as aidududeROYwang.

After the game, the Chinese Basketball Association on Sina Weibo congratulated China's women's national basketball team on finishing runners up again after 28 years. It also expressed gratitude to every athlete, coach, and staff member in the team for their dedication.

The official Twitter account of the FIBA Women's Basketball World Cup also praised the Chinese team as "playing their hearts out and did it in amazing fashion."