URUMQI, Oct. 20 (Xinhua) -- Northwest China's Xinjiang Uygur Autonomous Region on Tuesday issued a report on the employment of ethnic groups in the region. 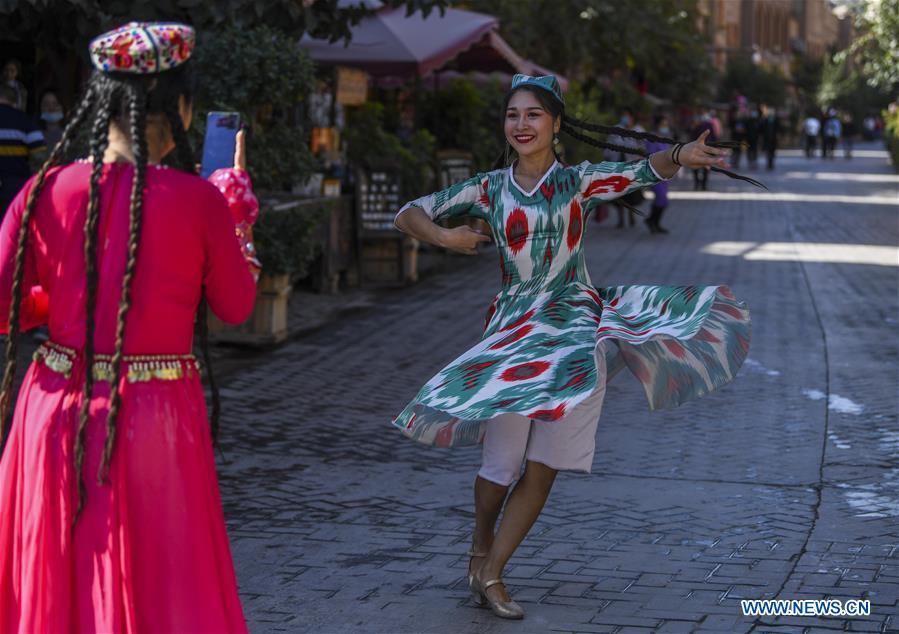 Residents have fun in the ancient city of Kashgar, northwest China's Xinjiang Uygur Autonomous Region, Sept. 20, 2020. The recovery of tourism in Xinjiang has been boosted as epidemic prevention and control becomes a new normal. (Photo: Xinhua/Zhao Ge)

The report, released by the Xinjiang Development Research Center, concludes that governments at all levels as well as enterprises in Xinjiang, and other provinces and cities have actively helped people of different ethnic minority groups find jobs and fully safeguarded their basic rights such as labor right and the right to development.

In recent years, local governments in Xinjiang have attached great importance to promoting job opportunities for workers of ethnic groups both within and outside the region.

The autonomous region has built a complete, scientific and efficient employment system and mechanism for workers to find jobs and ensure their job security while fully respecting personal wishes.

Xinjiang has invested heavily in vocational training over the years. Statistics indicated that the region had arranged various skill training for about 6.96 million people from 2014 to 2019.

Meanwhile, a spate of favorable policies and regulations related to employment have been formulated to clarify the legal rights of workers in Xinjiang and protect their religious freedom.

Over the past five years, the region has helped foster 379,400 new entrepreneurs, who have offered jobs to 827,400 people.

By the end of 2019, the number of people insured for basic endowment, unemployment and work-related injuries for urban and rural workers in Xinjiang had reached 18.91 million, with a coverage rate of more than 90 percent.