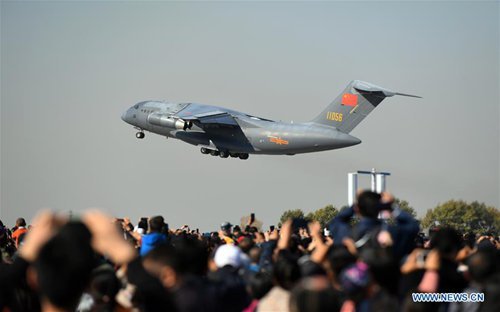 China's Y-20 strategic transport aircraft are finally getting its long-awaited domestically developed engines, which recently made their first public appearance, multiple media reports speculated recently. The new engines are expected to boost the Y-20's key performances including range and cargo capacity, in addition to reducing reliance on imported engines, experts said on Sunday.

Despite the new development hasn't been officially confirmed, several signs point to key progress being made in the WS-20 engine over the past weeks, according to media reports.

Earlier this month, the Xi'an Aircraft Industry (Group) Company Ltd under the state-owned Aviation Industry Corporation of China, the maker of the Y-20, released a photo that showed a turbofan engine with a high bypass ratio that had never been seen before, Beijing-based Aerospace Knowledge magazine reported on Saturday.

This unidentified engine is very likely China's domestically developed WS-20, and if this speculation is true, it is the first time the WS-20 has made a public appearance in an official media source, the magazine said.

In a recent China Central Television (CCTV) military program, Chinese military experts also revealed some new information on the WS-20. The report, quoting military expert Song Xinzhi, said that compared with the D-30, the Russian engine currently being used on the Y-20, the Chinese engine is much larger in diameter, and can provide more powerful thrust, uses less fuel, and enables the Y-20 to take off and land at airfields with shorter runways.

Speculation has it that the Y-20 has already begun to switch to the new engines, the CCTV report said.

A photo circulating on Chinese and foreign social media, allegedly showing a Y-20 equipped with four WS-20 engines in a test flight, drew the attention of military enthusiasts on Saturday.

The eventual use of the WS-20 engine on the Y-20 will give the aircraft a longer operational range and a larger cargo capacity thanks to its higher bypass ratio and greater thrust, a military expert who asked for anonymity told the Global Times on Sunday.

With the domestically made engines, the Y-20 can become capable of long-range or intercontinental flight while carrying heavy equipment like main battle tanks without stopping at a transit airfield for refuelling, the expert predicted, noting that a Y-20 equipped with WS-20 engines should be considered the true form of the aircraft.

It will also reduce China's reliance on imported military aviation engines, and become another milestone in China's aviation engine development, which used to be a weak link in the country's aviation industry, the expert said.

This is not the only new development related to the Y-20 this month. Recently, an aerial tanker variant of the Y-20 was spotted in the sky in an apparent aerial refueling maneuver for a J-20 stealth fighter jet, media reported last week.

A Y-20 pilot said earlier this year on CCTV that the Y-20 will have variants like the Y-20 aerial tanker and Y-20 aerial early warning aircraft.

The new engine could also be used on these Y-20 variants, analysts said.

It has been a busy year for the Y-20, as several of this type of aircraft joined in the fight against COVID-19, first domestically at the start of the year, then later in other parts of the world. It also participated in missions including sending Chinese troops and heavy equipment to the Russian Kavkaz-2020 strategic military drills in September, and also in September for the repatriation of remains of Chinese soldiers killed in the Korean War (1950-53).