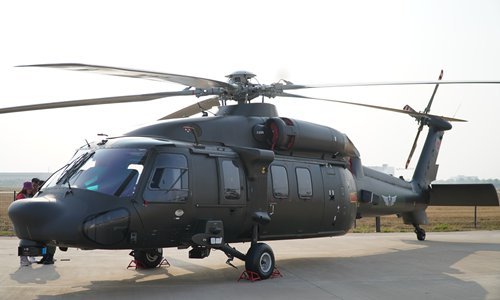 A Z-20 utility helicopter is on display prior to the 5th China Helicopter Exposition in Tianjin on October 9, 2019. (Photo: GT)

The Z-20 is expected to see wide applications and spawns even more variations for different tasks to boost combat efficiency and lower mass production costs, analysts said on Thursday.

The light gray-painted chopper flying in a coastal region was seen in a photo released by the Chinese People's Liberation Army (PLA) South China Sea Fleet in a statement introducing the fleet's recent exercises on Wednesday.

Beside the color difference from the original Z-20's dark green camouflage, the variation has a round, down-facing radar dome under its nose, and its rear landing gear is not equipped under the end of the tail but at the end of the cabin, the photo shows.

While netizens had taken photos of the variation, this is the first time for it to be featured in an official statement, they said.

The assault version was also recently caught on camera by Chinese military observers.

Citing a photo on social media, Ordnance Industry Science Technology, a defense magazine based in Xi'an, Northwest China's Shaanxi Province, said in a report on Tuesday that the armed Z-20 has a machine gun under its nose and additional short wings under cabin doors.

The short wings are used to mount eight anti-tank missiles, four on each side, in the photo, but they should also be able to mount other weapons like rocket launchers, machine guns and air-to-air missiles, the magazine report said.

Since the development of the Z-20 became known to the public, analysts have been predicting that it can spawn many different variations for vessel-based transport, search and rescue, medical support and special operations, among others.

Deng Jinghui, the chief designer at the China Helicopter Research and Development Institute of the state-owned Aviation Industry Corporation of China, said on China Central Television in November 2019 that he hopes the Z-20 would become the most-delivered type of helicopter in the country and remain in service for a long time.