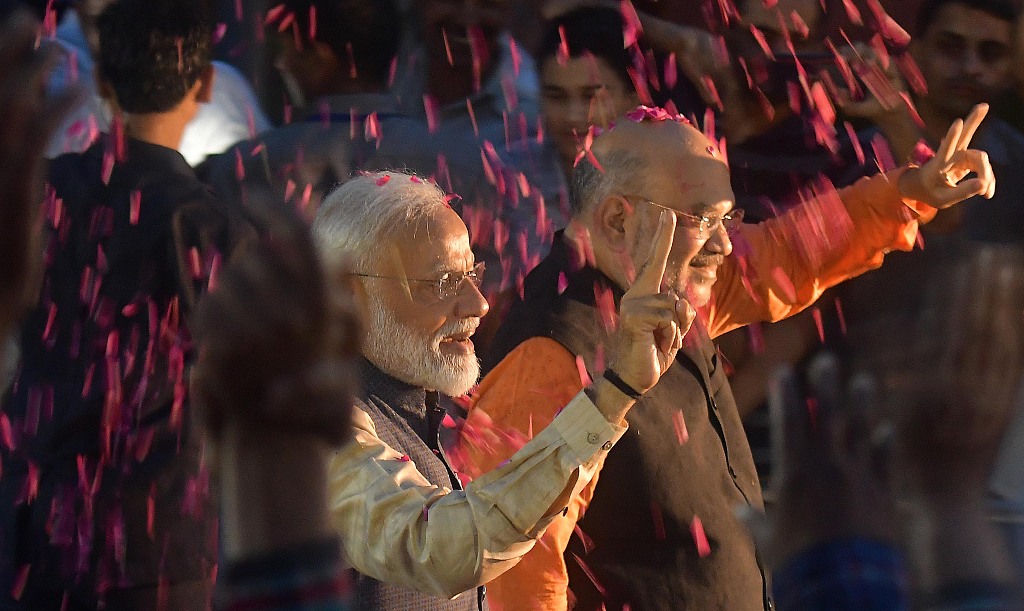 Prime Minister Narendra Modi show victory sign as he, along with the party President Amit Shah, arrives at the party headquarters to celebrate their victory in the 2019 Lok Sabha elections on May 23, 2019 in New Delhi, India. (Photo: VCG)

The Election Commission of India has announced the victory of the Bharatiya Janata Party, led by Prime Minister Narendra Modi, in the just-concluded 17th general elections.

He said as important neighbors, China and India are both large developing countries and major emerging market countries, and the meeting between leaders of the two countries in China's Wuhan last year pointed out the direction of development for bilateral relations.

"China attaches great importance to its relations with India, and stands ready to work with the new Indian government to deepen political mutual trust, carry out mutually beneficial cooperation, and promote bilateral ties to a new high," Lu said.

When answering a question about Pakistani Prime Minister Imran Khan congratulating Modi on his electoral victory in a tweet and Modi expressing thanks in response, Lu said China welcomes the positive interactions between the leaders of India and Pakistan.

Noting that the two countries are both important nations in South Asia, he said it is in the fundamental interests of both sides to live in harmony and it is also the common expectation of the international community.

China hopes Pakistan and India will continue to show goodwill toward each other, handle differences properly through dialogue, improve relations, and jointly safeguard regional peace and stability, he said.