In recent years, China has seen an increasing number of people who have returned or moved to the countryside to start their own businesses or make innovations, thanks to the efforts of local governments to create a better business environment for countryside-based entrepreneurs, including offering favorable policies. 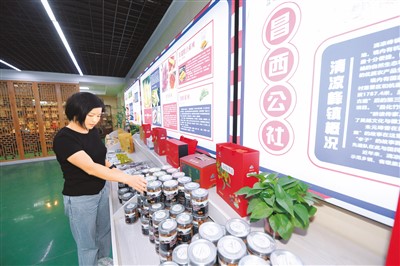 The size of this group reached a record high number of 10.1 million people last year, an increase of 19 percent from that in 2019. This marks the largest and fastest growth in the number of people moving back to the countryside to start their own businesses or pursue innovations in China. Statistics showed that each project initiated by people who returned or moved to the country’s rural areas to start their own businesses or make innovations could provide stable employment for 6.3 people and flexible employment for 17.3 people on average.

One typical example is Zhao Shan, a man born in Zheng’an county, Zunyi city, southwest China’s Guizhou province. Zhao returned to his hometown and founded his own company, Guizhou Baikal Musical Instrument Co. Ltd., in the county’s international guitar industrial park in 2016. Before that, he worked in the IT industry in Guiyang, the capital city of the province.

Zhao said he came up with the idea of the business when he learned that the local government was determined to develop the guitar industry.

“Although it was something I had never touched upon, I was confident about the online sales of guitars due to the personal experience in e-commerce that I gained in my previous job,” he noted.

Compared to other guitar producers in the industrial park, Zhao has put more effort into selling guitars on e-commerce platforms, a move that is now paying off. Last year, Baikal’s sales revenue stood at nearly 100 million yuan (about $15.58 million). The company’s success has also attracted many young local people to join the company’s e-commerce department, helping them find jobs in their hometown.

Another example is Li Weihu, an ex-serviceman who was born in Heze city in east China’s Shandong province. Originally, Li set up his business in Changzhou city, east China’s Jiangsu province. After Li learned about Heze’s efforts to attract investment in 2016, he decided to establish an entrepreneurship incubation base in his hometown. However, Li’s partners doubted the idea, pointing out that Li didn’t know much about his hometown as he had left for several years and might lack the resources necessary to start a successful business.

Heze has built 73 entrepreneurial parks (bases), where entrepreneurs can enjoy some of the most preferential policies, according to Zhen Junhua, an official.