CHINA China sees rise in volunteers due to increased awareness

China sees rise in volunteers due to increased awareness

Working as a waiter is a totally new experience for Zeng Hong. The 41-year-old man already runs his own business, but devotes much of his free time to volunteering. Serving customers in a special restaurant is the latest of his efforts. 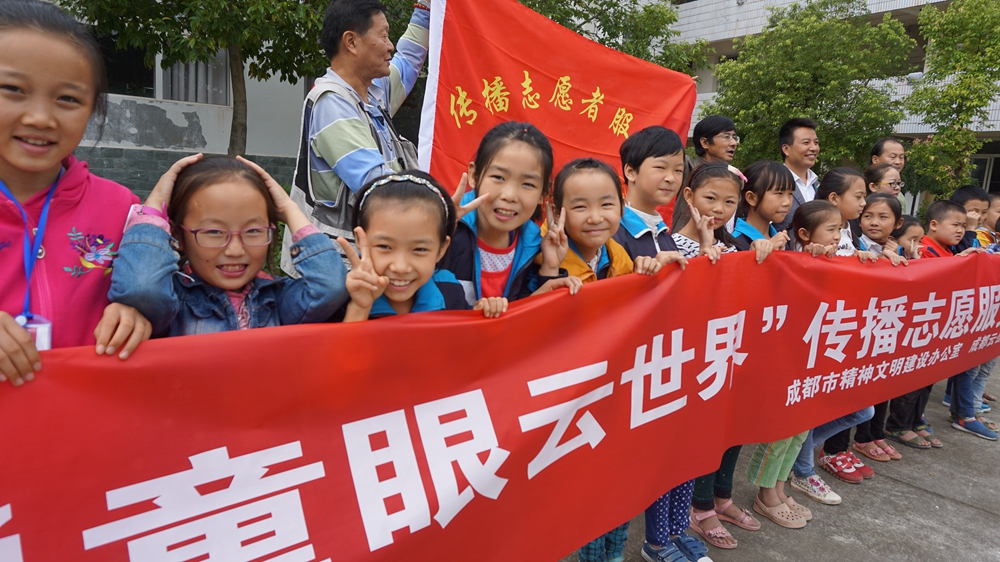 A group of elementary school students in Chengdu city participate in a volunteering activity. (Photo: CGTN)

"There are still many people who need help in one way or another. I would be very happy to help others in any way I can. This sets a good example for the younger generation," Zeng told CGTN.

This newly-opened restaurant in Jianyang, a county-level city of southwest China's Sichuan Province, aims to help outdoor workers – for example, those employed in sanitation jobs. It provides them with free meals, hot water, and a place to rest.

Liu Gang, chief of a local volunteer association, launched this program months ago.

"I hope we can also promote volunteerism and attract more people to join us. The restaurant can serve as a platform for volunteers to practice and communicate," said Liu.

Since it was founded last year, Liu's group has organized over 250 volunteer activities. That's more than any other volunteer group in Chengdu, the capital city of Sichuan.

Actually, volunteering across Sichuan Province has seen a boom since 2008 when most locals received a lot of voluntary services after the devastating earthquake. In Chengdu alone, the number of registered volunteers has exceeded two million.

To encourage people to serve and give back to society, the city government has worked out a series of regulations over the past decade. The latest incentive issued in August enables volunteers to enjoy various preferential treatments with the points they earn from participating in different activities.

"Our vision is to make volunteering a new fashion and lifestyle among citizens. It's an essential way to make friends and be of help, which is reflective of our city's culture," said Wei Na, chief of the Volunteering Service Department of Chengdu.

Today, volunteer activities in this southwestern metropolis are diverse and available in urban neighborhoods, in public facilities like hospitals, as well as rural areas.

The numbers don't lie when it comes to the country's rapid development in this area. Official data shows that China now has a total of 126 million volunteers. And this figure doesn't include those registered anonymously or under aliases. There are also about 650,000 volunteer groups now in the country.

Chinese government has also laid great emphasis to the promotion of volunteerism. In July, Chinese President Xi Jinping said that governments at all levels should build more platforms for voluntary service, give more support, and promote its institutionalization.

"Voluntary service is an important symbol of the progress of social civilization," said President Xi.

In September 2017, the State Council issued the Regulation on Volunteering Service, providing an institutional guarantee for the volunteering development in the country.

Zeng said that it's easy to sign up as a volunteer, but it takes dedication to become one.

"It's an undertaking for a lifetime. For me, I will absolutely carry on," he said.