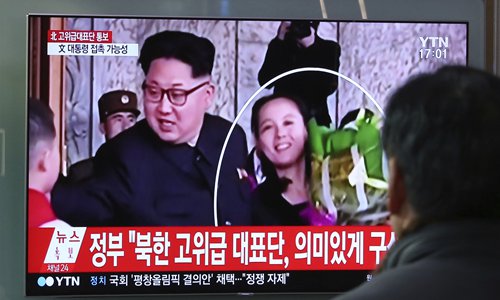 China is sending its biggest delegation to the upcoming Pyeongchang Winter Olympic Games, but some tourist agencies still shun South Korea over the deployment of an anti-missile system. China sent a 181-member delegation, including 82 athletes, which is the biggest Chinese delegation since the Vancouver Games in 2010, Gao Zhidan, deputy Chef de Mission of the delegation, was quoted as saying by the Xinhua News Agency on Wednesday. "We came here to gain experience and prepare for the 2022 Winter Olympics in China," 20-year-old skier Wang Jin told Xinhua. Wang will compete in the Women's Moguls on Friday.Compared with the Summer Olympic Games, the Winter Games are easily affected by weather, and China, a summer sports power, can learn how to better hold events under sub-zero temperatures, Ren Hai, a professor at the Olympic Research Center of Beijing Sport University, told the Global Times.The Chinese athletes will compete in 55 medal events starting Friday. Online discussions and media reports have put figure skating, short track speed skating and speed skating as the most promising events for gold medals for Chinese winter games delegation. THAAD issueHashtags of the Pyeongchang Olympic Games have attracted nearly 100 million page views on Sina Weibo as of press time.A customer service staffer at the CAISSA Tourism Group, the only agency authorized to sell tickets to the Games in China, told the Global Times that all Games-related products were sold out Tuesday afternoon, refusing to give the sales figures.The products include tickets, flights and hotel bookings ranging from 600 yuan ($95) to over 10,000 yuan, the staffer said. To attract Chinese audiences, South Korea has implemented a visa-free policy from December 2017 to March 2018 for Chinese who have visited the country within five years, have tickets for the Games and travel to South Korea through authorized agencies, a customer service staff at the Korea Tourism Organization told the Global Times on Wednesday.However, several travel agencies reached by the Global Times said that traveling to South Korea remains closed as many Chinese feel hurt by South Korea's installation of the US Terminal High Altitude Area Defense (THAAD) anti-missile system, which China regards as a security threat. Only a few brick-and-mortar stores in Beijing and East China's Shandong Province still provide travel services to South Korea, Shanghai-based tourism company Lvmama told the Global Times on Wednesday. Yonhap News Agency reported on January 30 that around 8,000 Chinese tourists have booked trips to Inchon and Gangwon.Analysts noted that Seoul still needs to show more sincerity to China's national interests to fix Sino-South Korean ties to the level before THAAD's deployment.Reaching outKim Yo-jong, the sister of North Korea's top leader Kim Jong-un, will come to South Korea later this week to attend the Games, Seoul's unification ministry said, Xinhua reported. Kim Yo-jong, the first vice director of the ruling Workers' Party of Korea, was included in the delegation headed by Kim Yong-nam, president of the Presidium of the Supreme People's Assembly. The delegation will make a three-day visit for the Games.By sending the ceremonial head and a figure directly related to its top leader who has real Party and military influence, North Korea has shown a strong determination to fix inter-Korean ties through the Games, Yang Xiyu, a senior research fellow at the China Institute of International Studies, told the Global Times on Wednesday.Improved inter-Korean relations will help reduce war risks on the peninsula, especially when the US has shown greater determination to use its military, Yang said. Increased contacts with the South will also help lift the North out of isolation, he added.