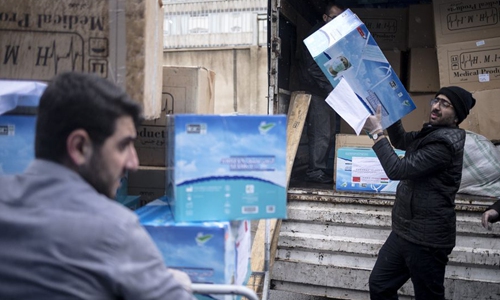 Staff of Iran's Ministry of Health and Medical Education arrange boxes of masks donated by China in Tehran, Iran, on Feb. 25, 2020. (Xinhua/Ahmad Halabisaz)

China has sent a team of four disease control experts to Iran to support the country's anti-epidemic effort, the Global Times learned, following the rising cases of infections in the country including at least seven high ranking officials, including the vice president, and the comparatively much higher mortality rate.

This triggered concerns over whether Iran has the ability to contain the further spread of the virus in the country, and given its key geographic position in the Middle East, whether it could lead to an explosive outbreak in the region.

China's Ministry of Foreign Affairs said China has donated a batch of nucleic acid testing kits and medical equipment to Iran, and will continue to provide assistance within its capacity according to Iran's needs, including cooperation in epidemic prevention and control and medical treatment.

Thirty-four people have died from coronavirus in Iran and 388 are infected, Iranian health ministry spokesman announced on state television on Friday. Iran has the highest death toll outside China.

Ehsan, an Iranian student in Shanghai, told the Global Times on Friday that his family members in Tehran now feel worried, and they have suspended routine gatherings at his grandparent's home.

"The only thing that keeps me hopeful is that the weather is becoming warmer in Iran which can considerably decrease the infections. The second is China as a good friend to Iran can help us with medical facilities and experiences to help Iran fight the virus," he said. "Iran is in urgent need of masks."

Recently, some posts circulating online said that Iranian people blamed Chinese people for bringing in the virus. Global Times learned from relevant parties that this is not true and the source of the cornonavirus in Iran is unknown yet.

Ehsan said schools and Friday prayers have been suspended in many cities in Iran. But in the holy city of Qom which has Iran's highest number of infected cases, the holy shrine has not been closed. "I hope they can close it immediately," he said.

Ehsan said Iran lacks medicine and medical facilities including masks, gloves, safety glasses and safety clothes. "It is so hard to fight the virus," he said.

He noted that some Iranian people still don't treat the situation seriously and even view it as a holiday to go traveling. He hopes the government can impose stricter measures,  including closing all mosques. While Friday prayers have been cancelled, some Muslims still gather at least three times a day for prayers, he said.

Zhu Weilie, a Middle East expert at Shanghai International Studies University, told the Global Times on Friday that Iran faced mounting pressure in preventing and controlling the virus, and it may lose control of the virus epidemic given that its government was focused on its economic problem resulting from US sanctions, and its poor medical service and frequent religious activities just worsened the situation.

It's a big challenge for Iran to mobilize its citizens like China did in screening residents and checking their travel history, Zhu said.

Wang Yanbo, who is in charge of the branch of a State-owned company in Iran, told the Global Times on Friday that as Iran is set to celebrate its traditional new year in one month, it may further aggravate the situation.

Zhu suggested that Iran learn from China and cancel its religious activities and even suspend work and classes, and seek help from others to fight the virus outbreak.