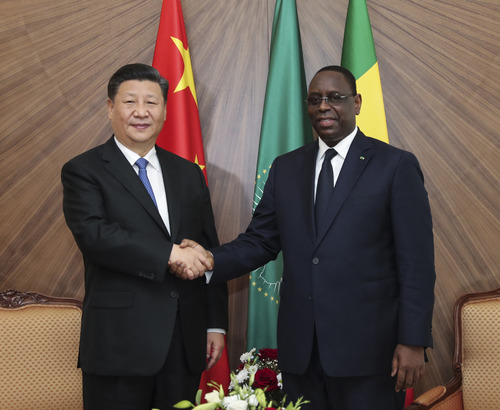 The relations between China and Senegal are poised to reach new heights thanks to President Xi Jinping's state visit to the West African nation, the first by a Chinese head of state in nine years.

Xi and Senegalese President Macky Sall held talks and attended a ceremony for the signing of multiple cooperation documents, including one on jointly building the Belt and Road.

Senegal is the first West African country to sign a Belt and Road cooperation document with China.

Xi said China is willing to join hands with Senegal to lift bilateral ties and cooperation to a higher level, so as to bring more benefits to both peoples.

China-Senegal ties have seen sound and stable development since the restoration of diplomatic ties in 2005. The relationship was elevated to a comprehensive strategic cooperative partnership in 2016. China is now Senegal's second largest trading partner and largest source of financing.

"The China-Senegal cooperation has a new starting point with Xi's visit," said Cheng Tao, former director-general of the department of African affairs of China's Ministry of Foreign Affairs. "The visit will strengthen mutual political trust and boost China-Senegal pragmatic cooperation."

Senegal is the second stop in Xi's first overseas trip after being re-elected Chinese president in March. He has already visited the United Arab Emirates and will pay state visits to Rwanda and South Africa, attend the 10th BRICS summit in Johannesburg, and visit Mauritius during a stopover.

It is also Xi's first foreign visit after the Central Conference on Work Relating to Foreign Affairs. "Such arrangement further highlights the importance of China-Africa relations in China's work relating to foreign affairs in the new era," said Chen Fengying, a research fellow at the China Institute of Contemporary International Relations.

This year is key for China-Africa ties. In September, a summit of the Forum on China-Africa Cooperation (FOCAC) will be held in Beijing.

In his talks with Xi, Sall vowed Senegal's full support in strengthening the FOCAC, deepening cooperation between China and Africa, and establishing the China-Africa community with a shared future.