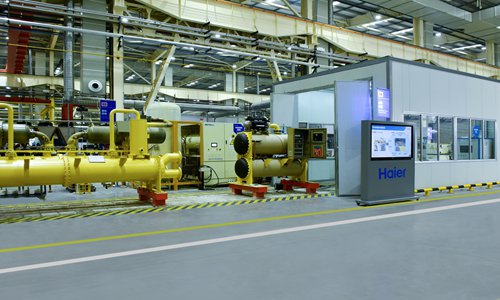 As China beefs up efforts to transform and upgrade its manufacturing industry toward a digitized and intelligence-based model, an open and cooperative business environment is essential, said experts and executives.

Based on a survey of over 1,000 global manufacturing plants, in September, the World Economic Forum (WEF) identified nine plants as the "lighthouse" factories that represent the Fourth Industrial Revolution (4IR).

The ranking was based on the implementation of smart manufacturing initiatives that are part of the 4IR, including data analytics and artificial intelligence (AI).

Liu Yuping, senior manufacturing technical manager at Haier, told the Global Times in a recent interview that the root reason for such AI technologies bearing fruit in the factory is that they allow products to be based on consumer demand.

"The unification between internal employees and users' requirements creates the conditions for mass customization," Liu noted.

Chinese manufacturers, big or small, are positively embracing opportunities created by the 4IR, and this is also a key transformation and upgrading period for the country's manufacturing industry, said Ni Jun, a professor at the University of Michigan.

But there is still insufficient innovation in China's factories in general, Ni told the Global Times in an interview at the 2018 Summer Davos Forum held in North China's Tianjin  from September 18 to 20.

"The promotion and application of 4IR technologies like big data analytics, AI and cloud computing are based on improved automation and information," Ni said, adding that there is still a long way to go.

He estimated that most big manufacturers in China are expected to develop new technologies in automation and information in the next five to 10 years.

Some large enterprises like Haier and Foxconn, formally known as Hon Hai Precision Industry, are leading the transformation by speeding up the development of industrial internet platforms.

Foxconn Industrial Internet Co, a Foxconn unit focusing on the industrial internet, got listed on the Shanghai Stock Exchange in June, becoming the first stock of its kind to float.

Haier has also created its self-developed COSMOPlat, an open industrial internet platform, with the aim of developing the internet of things and applying it in various sectors, according to Liu.

Ni said that priority should be given to industry, with the internet offering enhanced support.

The rich variety of China's industrial sectors, technology and equipment is an advantage, as is the domestic presence of foreign firms operating in these sectors, Ni noted.

In addition, Chinese enterprises are more likely to attain business growth in leaps and bounds compared with foreign players since the latter have much higher legacy costs to pay, which poses an obstacle for technological upgrading, he said.

Ni also emphasized the importance of a cooperative mind in the manufacturing sector globally.

"Manufacturing involves cross-sector and cross-discipline research and expertise. It's almost impossible for a single country to do it all alone," Ni said during the interview.

"A key factor for manufacturing innovation is an open environment," Liu said. "It is difficult for enterprises to adapt quickly to market demand and competition if they only rely on internal resources to drive innovation," he remarked.

It is vital to transfer creative ideas to real products and profits through seeking external partners, outsourced research and strategic alliances, Liu noted.