BEIJING, April 14 (Xinhua) -- China has reported new progress in the research of COVID-19 drugs and therapies, sharing with the world its clinical experience and achievements and pushing forward international cooperation in the study of the disease. 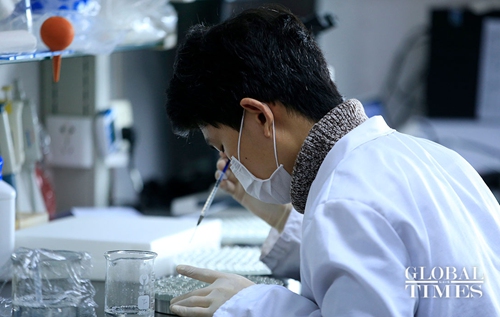 A scinetist is doing research on a vaccine against COVID-19 in Shanghai. (Photo: Global Times)

One of the highlights of the new progress is stem cell treatment, which has been used in more than 200 cases in Wuhan, the hardest-hit city amid the epidemic in China, Sun Yanrong, deputy head of the China National Center for Biotechnology Development under the Ministry of Science and Technology, said at a press conference on Tuesday.

Clinical trials show that the therapy is safe, and can increase the cure rate of severe patients by inhibiting lung inflammation and improve the respiratory function of patients in the rehabilitation period, according to Sun.

Since the outbreak of COVID-19, China has launched 27 projects in the research of drugs, therapies and related technologies. More than 3,200 researchers from 152 hospitals, universities and institutions across China, including those on the front line of the fight against COVID-19 in Wuhan, have participated in the research.

At present, clinical trials on four drugs are in progress, and more than 10 research achievements have been included in the diagnosis and treatment guidelines on COVID-19, Sun said.

Several Chinese research teams are focusing on the utilization of monoclonal antibodies, and have achieved some progress, Sun said.

In addition, Chinese researchers have developed human immunoglobulin from the COVID-19 convalescent plasma, which could be used in the clinical treatment of patients, as well as the passive immune protection of high-risk groups.

China is also promoting research on independently developed drugs, and accelerating the clinical research on a series of drugs including traditional Chinese medicines, Carrimycin, Tetrandrine and Azvudine, Sun said.

China has shared with the world its experience in epidemic prevention and control at the earliest possible date, with the results of Chinese scientists' clinical research on COVID-19 quickly published in international academic journals.

A number of Chinese research achievements have been applied in the clinical treatment of COVID-19 in other countries.

The World Health Organization and some countries are also carrying out clinical research on Chloroquine and Hydroxychloroquine. Several drugs and therapies used by China such as convalescent plasma therapy and Tocilizumab have also been approved by many countries in their treatment or clinical research, Sun said.

She said the development of the drugs and therapies requires the wisdom of the whole world. Chloroquine Phosphate was invented by German scientists 80 years ago, Favipiravir was developed by Japanese scientists 20 years ago, and Carrimycin was created by Chinese scientists 30 years ago.

She said China is actively expanding the channels of international scientific and technological cooperation and promoting joint clinical research on the disease.