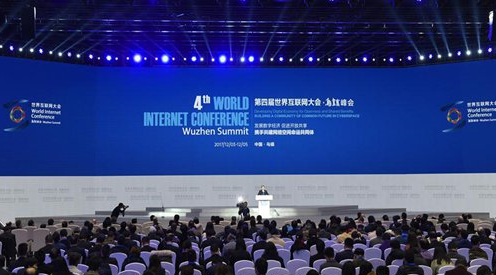 Rising artificial intelligence (AI) technologies, big data and open source platforms have boosted technological breakthroughs in China, showcasing the country's impressive and innovative Internet development, said experts attending an international conference here. A slew of breakthroughs have been made in the information technology (IT) sector, with 60 percent of technology achievements unveiled at the 4th World Internet Conference (WIC) made by Chinese companies. The three-day conference ended on Tuesday in Wuzhen, East China's Zhejiang Province. "This progress reflects the overall development of China's IT sector," Wu Hequan, president of the Internet Society of China, told the Global Times following the closing ceremony of the WIC. The achievements include Huawei Technologies Co's 5G mobile data system that has yet to go into commercial use; Alibaba Group Holdings' self-learning cloud computing system that might be used to ease traffic congestion; and the world's fastest supercomputer the Sunway TaihuLight, which can make 18.9 quadrillion calculations per second, developed by the National Supercomputer Center in Wuxi, East China's Jiangsu Province.  The Sunway TaihuLight supercomputer's earthquake simulation is this year's recipient of the Gordon Bell Prize which is awarded by the Association for Computing Machinery.  The association said the simulation program might help predict and prepare for earthquakes. Over the past five years, the Chinese government has established guidelines to strengthen China's Internet development and its cyber governance, according to the China Internet Development Report 2017, released by the Chinese Academy of Cyberspace Studies on Monday. The country has seen its network infrastructure grow rapidly over the past few years. By June 2017, the number of broadband users reached 322 million and 4G users grew to 890 million, the report showed. The number of patents issued in the computer, communication and other electronic equipment sector reached 227,365 by the end of 2016, the highest in the world."While the Internet sector maintains its growth momentum, the era of AI and 5G have already become a reality and will be seen as disruptive technologies," a senior executive from Huawei, who asked not to be identified, told the Global Times on Monday. Huawei invests 10 percent of its annual revenues in research and development, he said. "The IT sector in China has accumulated experiences in embracing AI, big data platforms and open source platforms," he told the Global Times. In some other sectors like supercomputing, Chinese research teams are now in a leading position in scientific discoveries. The Sunway TaihuLight supercomputer shows Chinese technology could one day become a benchmark, Yang Guangwen, director of the project, told the Global Times in an earlier interview.Innovation and openness China, which has benefited greatly from the IT boom, has now become an active leader in further cooperating with the international community in Internet development and management, Ren Xianliang, deputy head of the Cyberspace Administration of China, told a press briefing after the closing ceremony of the WIC. During the conference, some foreign industry representatives said that they were amazed by China's innovative spirit and the speed of growth in the world's second-largest economy. Some have said they intend to team up with Chinese tech companies in more sectors.The use of AI technologies in products such as DJI's consumer drones are phenomenal, RJ Pittman, chief product officer of eBay, told the Global Times on Tuesday. "They're one of the leaders in AI, they're using that technology to make these products more fun, more useful, more consumer-friendly. It's absolutely a breakthrough," Pittman said, adding that there will be tremendous opportunities in the AI sector and eBay is looking forward to working more with Chinese tech firms. EBay will continue to strengthen partnership with its Chinese counterparts with more domains beyond e-commerce, he added.