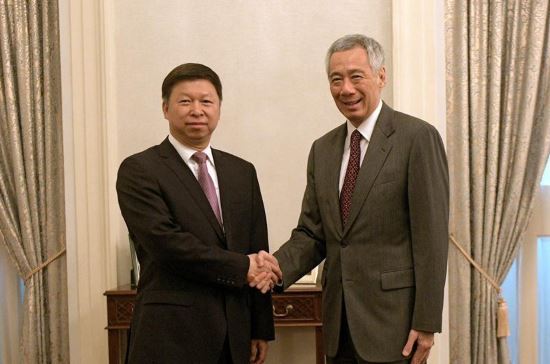 Lee Hsien Loong (R), Singapore's prime minister and secretary-general of the ruling People's Action Party, meets with Song Tao, minister of the International Department of the Central Committee of the Communist Party of China, in Singapore, March 25, 2019. (Photo: Xinhua)

SINGAPORE, March 26 (Xinhua) -- The Communist Party of China (CPC) and Singapore's People's Action Party (PAP) have expressed their willingness to further develop the ties between the two parties.

Singapore's Prime Minister Lee Hsien Loong, who also acts as the PAP's secretary-general, met here Monday with Song Tao, minister of the International Department of the Central Committee of the CPC.

The Singaporean prime minister said his country attaches great importance to developing its relations with China and is willing to build close contacts with the CPC and boost the cooperation between the two sides within the framework of the Belt and Road Initiative, with an aim to promote the bilateral ties to advance with the times.

For his part, Song said China and Singapore have established an all-round cooperative partnership progressing with the times under the guidance of the leaders of the two countries which has chartered the direction for the further development of the bilateral relations.

The CPC is willing to work together with the PAP to jointly implement the consensus reached by the leaders of the two countries and deepen the dovetail of the national strategies under the Belt and Road initiative and to advance bilateral ties and pragmatic cooperation in all fields to a new high, Song said.