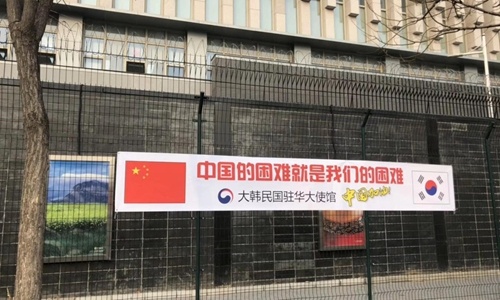 Chinese and South Korean governments are working on details over establishing a fast entry policy, known as the "green channel" between the two countries, in the light of improved COVID-19 epidemic situation. The policy has been lauded by Korean companies and Chinese observers, as they believed that such upbeat development between the two friendly neighbors would rapidly stimulate the recovery of the region and also inject strong momentum for a slowed world economy under the impact of the pandemic.

China is conducting negotiations with relevant countries over establishing fast passage for urgently needed personnel who are involved in key sectors such as business and technology, with the goal of stabilizing economic and trade cooperation between China and these countries under the premise of effective epidemic control, according to the Chinese Foreign Ministry on Tuesday.

Geng Shuang, a Foreign Ministry spokesperson, made the remarks at a routine press conference on Tuesday, commenting on reports on China easing border controls with other countries.

China and South Korea have reached agreements to establish such a fast passage between the two countries during a recent video conference between Chinese Vice Foreign Minister Le Yucheng and South Korea's first vice foreign minister Cho Se-young, and the two sides are working on details to implement such a policy on the working level, Geng said.

The policy will not only provide convenience but also benefit the development of those enterprises in both China and South Korea, a manager with public relations department of Hyundai Motor, the South Korean multinational automotive manufacturer, told the Global Times on Tuesday.

An agreement on a simplified plan for entry procedures for entrepreneurs amid a global pandemic of COVID-19 also demonstrated the Chine se and South Korean governments' support for economic and cultural exchanges between the two sides, said the Hyundai manager.

"The governments of South Korea and China are in talks to operate a fast-track policy called 'Green Lane' to allow authorized businessmen from both countries to do business activities right away upon arrival," South Korea-based business news site mk.co.kr reported, quoting Korean Ambassador to China Jang Ha-sung as saying during a regular briefing at the Korean Embassy in China on Monday.

It's necessary for neighboring countries to explore and coordinate policy supports as the global economy has been under the impact of the COVID-19 pandemic, Li Tianguo, associate professor at the National In-stitute of International Strategy, Chinese Academy of Social Sciences, told the Global Times on Tuesday.

In particular, China and South Korea have close economic and trade relations, and the two countries have always been an important investment target country for each other, so it is necessary to jointly discuss countermeasures, mitigate losses and restart the economy in a fast manner, Li further said.

The COVID-19 pandemic has largely disrupted trade between China and South Korea, and trade exchanges are yet to recover despite the situation in both of the two neighboring countries has improved over the past days.

In the first 20 days of April, South Korea's export posted a fall of 26.9 percent from the same period in 2019, according to Korea Customs Service.

Among which, its export to China, also South Korea's biggest trading partner, declined by 17 percent year-on-year, and exports to the US and the European Union tumbled 17.5 percent and 32.6 percent respectively.

Experts speculated that the "green channel" policy could be firstly applied in sectors where China and South Korea are closely working in, such as auto, chemical, electronics, and machinery, adding that as important trade partners, the two's cooperation is critical to the normalcy of East Asian supply and will inject momentum to a slow world economic growth. 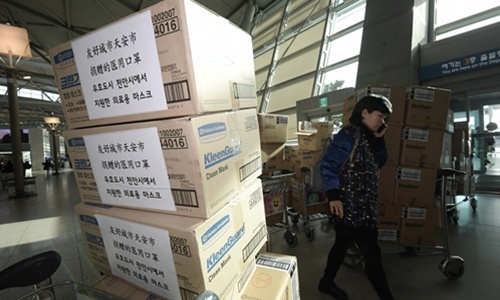 Meanwhile, Li cautioned that while relaxing some of the control measures, authorities in the two countries must also ensure that some anti-pandemic measures are strictly implemented, such as temperature monitoring, detailed registration of addresses and contacts, to ensure timely and accurate tracking when any situation occurred.

Analysts said the policy could also be further extended to Japan and other countries and regions in the world, to resume necessary business interactions and travel as soon as possible.

The South Korea Chamber of Commerce in China did not respond to an interview request from the Global Times as of press time on Tuesday.

Kwon spoke highly of China's achievement in its COVID-19 battle, and expressed willingness to broaden cooperation with China in the post-epidemic age.

Xing said the Chinese Embassy will continue to play the role of bridging the two sides, to work together with the Korean side to promote the upgrade of their business and trade relations.

China's National Immigration Administration (NIA) told the Global Times on Tuesday that it is not aware of such negotiation over the easing of quarantine policy between China and South Korea.

And a staffer with the administration added that the temporary suspension of entry in the country by foreign nationals holding visas or residence permits (valid to the date of the announcement on March 26) holders, which went effective on March 28, has not been lifted.

Foreign nationals coming to China for necessary economic, trade, scientific or technological activities or out of emergency humanitarian needs may apply for visas at Chinese embassies or consulates. Entry by foreign nationals with visas issued after this announcement will not be affected, per the official website for the notice jointly made by the NIA and the Chinese Foreign Ministry.

Geng also revealed that during a joint video meeting on COVID-19, co-hosted by Chinese Vice Foreign Minister Luo Zhaohui and Permanent Secretary Chee Wee Kiong of the Ministry of Foreign Affairs of the Republic of Singapore, the two sides had agreed to explore ways to facilitate the necessary personnel exchanges while working to ensure the public health security.