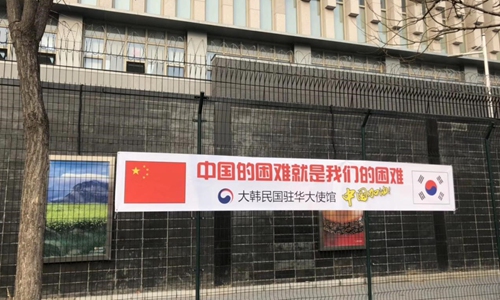 South Korea and Japan have both shown great support for China amid the ongoing novel coronavirus pneumonia outbreak, which many Chinese citizens hailed as a sign of the deepening friendship of the three East Asian countries.

The government of Seoul, capital of South Korea, said on Tuesday it would donate medical supplies and equipment worth around 3.5 million yuan ($506,000) to dozens of Chinese cities including Beijing, to help China combat the pneumonia epidemic.

Yonhap News Agency reported that medical supplies to China include 1,000 protective outfits, 500 pairs of medical goggles, and 30 thermal imaging cameras, and the country's Korea Federation of SMEs (small and medium-sized enterprise) also participated in the donation.

A batch of materials are expected to leave Incheon International Airport and arrive in Seoul's Chinese sister cities, including Beijing and some other cities in Northeast China's Heilongjiang, Jilin and Liaoning provinces, on Wednesday, it reported.

Seoul mayor Park Won-soon also extended his gratitude toward Beijing's previous assistance of special assistance teams to Seoul during the MERS outbreak, and wished China a rapid easing of the current difficulties.

Additionally, the Korean Embassy displayed a banner which read, "China's difficulties are also ours." The embassy wrote in a post on China's Twitter-like platform Sina Weibo, including a picture of the banner that read "South Korean Embassy is with you," with the hashtag "because we are family."

Lawmakers of the Japanese ruling party, the Liberal Democratic Party of Japan (LDP), would each donate around 320 yuan to China, Toshihiro Nikai, the party secretary general told the media on Monday.

Japan is ready to mobilize the whole country and provide all assistance possible to China in combating the novel coronavirus pneumonia outbreak, heavyweights of the ruling camp, including Toshihiro Nikai, said on Friday, the Xinhua News Agency reported.

A friend in need is a friend indeed, said Nikai, adding that the Japanese side is ready to spare no effort to provide all possible assistance to China and work with China to combat the epidemic.

Japan has collected 120,000 sets of protective outfits and will send them to medical institutions in Hubei, Zhejiang and Guangdong provinces as well as other places as soon as possible, Nikai said.

The epidemic has proved who are true friends, and China will remember, Chinese netizens said.

"Come to Harbin [capital of Heilongjiang Province] and the local cuisine will be my treat, dear friend," wrote one Weibo user, welcoming friends from Japan and South Korea.

A TV station in North China's Shanxi Province withdrew the airing of a TV series that contains plots about the War of Resistance against Japanese Aggression (1931-1945), with netizens speculating that the withdrawal is a response to Japan's friendly gestures as it has done a lot to assist in the novel coronavirus pneumonia fight in China.