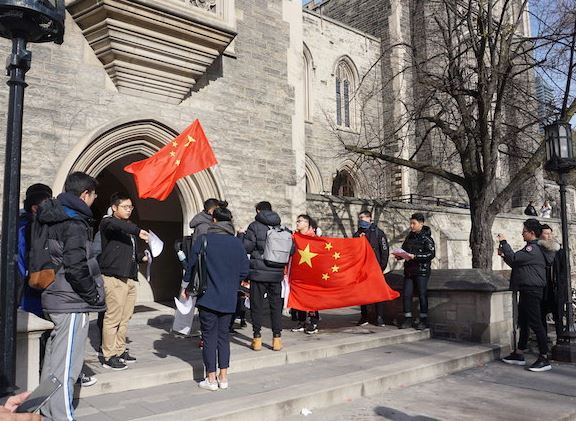 China strongly supports the patriotic actions of Chinese students at the University of Toronto and McMaster University, opposing the Tibet and Xinjiang separatism forces.The Chinese Embassy in Canada also responded to the media hype over the issue, saying the Chinese government "has nothing to do" with the incidents.Chinese students at the University of Toronto, Scarborough campus recently protested against a Tibetan separatist who was elected student president. A group of Chinese students at McMaster University in Ontario opposed the separatist speech smearing China's Xinjiang policy. Some Canadian media alleged that the Chinese government exerted influence on these two incidents. The spokesperson, who was not named in the statements released on the embassy's website on Saturday, said, "What happened recently at the University of Toronto and McMaster University has nothing to do with the Chinese Embassy and Chinese Consulate General in Canada." The embassy also showed support to Chinese students. "We strongly support the just and patriotic actions of Chinese students. Safeguarding sovereignty and opposing separatism are the common positions of the international community, and they are also the positions the Canadian government upholds," the Chinese Embassy in Canada spokesperson said.The spokesperson of China's Consulate General in Toronto also said that they only learned about the news from media. The actions were taken spontaneously by the students based on the facts and patriotic sentiment.Canada advocates freedom of speech, said the spokesperson of the Chinese Embassy in Canada. "Since the 'Tibet independence' and Xinjiang separatists forces are allowed the freedom to speak, people who oppose them should also be entitled to enjoy the freedom to speak."The spokesperson added that Tibet and Xinjiang-related issues are essential to China's sovereignty, territorial integrity and core interests. "The Chinese government protects the freedom of religious belief and all related rights of people of ethnic groups in Tibet and Xinjiang in accordance with the law," the spokesperson stressed. The remarkable achievements in economic and social development in China's Tibet Autonomous Region and Xinjiang Uyghur Autonomous Region should be apparent. "In order to combat the "three evil forces" (terrorism, extremism and separatism) in China and abroad, the Chinese government has taken necessary measures to counter terrorism and extremism in Xinjiang and has made remarkable achievements," the spokesperson said. "We resolutely oppose any country or anyone who provides support and convenience of any kind to Xinjiang separatists forces and Tibet-independence activities."