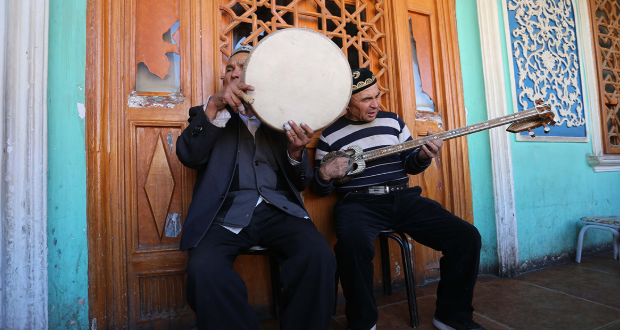 China refuted claims made by Turkey's foreign ministry on the alleged death of a Uyghur musician, claiming the man is still alive and in good health. The Chinese Embassy in Turkey also strongly opposed accusations from Turkey on Xinjiang's vocational education and training centers, saying the accusations are "contrary to the facts" and were made up "out of thin air."In a statement Saturday, Turkish foreign ministry spokesman Hami Aksoy alleged that Uyghur poet and musician Abdurehim Heyit had died in custody. He also called the vocational training centers a "great shame for humanity."A spokesperson from the Chinese Embassy in Turkey said in a statement on Sunday that Heyit, 57, who had performed with the Xinjiang Art Theater Song and Dance Troupe, is still alive and in good health. The embassy said Heyit was arrested on suspicion of endangering national security.On Monday, Hua Chunying, a spokesperson for China's Foreign Ministry, criticized the claims of Aksoy over the fabricated death of Heyit. Turkey made groundless accusations based on an absurd lie. It is totally "wrong and irresponsible," Hua said at the routine press briefing.  The Chinese government protects the basic rights of people of all ethnic groups in Xinjiang, said the spokesperson of the Chinese Embassy in Turkey. "What needs to be emphasized is that the right to life is a basic human right, and terrorism and extremism severely threaten that right and the safety of all people in Xinjiang," the embassy spokesperson said. The spokesperson, who was not named in the two statements released on the embassy's website on Sunday, also said that "both China and Turkey are confronted with grave counter-terrorism situations. We oppose the double standards on counter-terrorism and hope Turkey correctly learns and understands the counter-terrorism and de-extremism measures that China has taken." Analysts said that Pan-Turkism has long existed in Turkey and has brought up Xinjiang from time to time. Since 2016, the Erdogan administration has kept a restrained attitude over the question after a failed coup. The Turkish foreign ministry claim shows their swaying attitude but it cannot tell that Turkey has made drastic changes in its policy toward China. It was the spokesperson from the Turkish foreign ministry that blamed China this time, which shows Turkey doesn't intend to make a fuss about it. Bringing up the Xinjiang question this time may help the Erdogan government win more votes in the upcoming election in March, Zan Tao, a professor from Peking University, told the Global Times on Monday.Given that the current situation in the Middle East and Turkey's relations with Europe and the US, the ties between China and Turkey won't further intensify in the big picture and strained China-Turkey relations won't do any good to Turkey, analysts stressed."The Xinjiang question should not be the mainstream problem of China-Turkey relations," Yang Shu, head of the Institute for Central Asia Studies at Lanzhou University, told the Global Times, calling on the Turkish side to take the interests of the two sides into account. Stable Xinjiang The vocational education and training centers in Xinjiang are not "internment camps," as the Turkish side alleges, and their core objective is to counter terrorism and extremism, the Chinese Embassy spokesperson said in a statement.The centers unite, educate and save the vast majority who commit minor crimes from becoming victims of terrorism and extremism, the statement said. The embassy's statement maintains that the centers are open to the public and China has invited envoys and journalists from 12 countries including Turkey to visit them. "The journalists who were invited to Xinjiang wrote objective reports but the reports were ignored by some people. All I can say is these people are biased or have other motives," the spokesperson said. Accusations from other countries won't change China's Xinjiang policy. The Xinjiang question is complicated and difficult for others to understand for now but the Chinese government will continue to maintain the stability of the region and show the world a developing Xinjiang, analysts noted. Since the establishment of the centers, there have been no terrorist incidents in Xinjiang for over 25 months, and the security situation has greatly improved, the Chinese embassy noted.  In 2017, Xinjiang received more than 100 million domestic and foreign tourists, up 32 percent, and 150 million tourists visited last year, a 50-percent increase, the statement said.