Hong Kong is one of China's special administrative regions (SARs), the UK does not have any supervisory or so-called moral responsibility over Hong Kong after its handover, and it has no right to use the Sino-British Joint Declaration as an excuse to intervene in Hong Kong, a spokesperson from China's Ministry of Foreign Affairs (MFA) said on Tuesday. 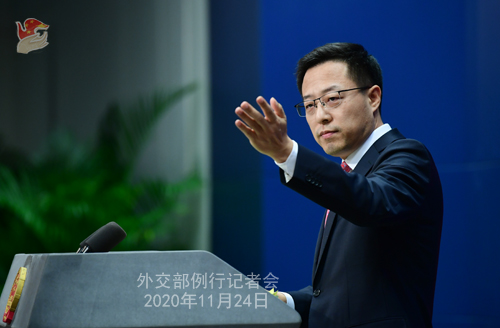 Zhao Lijian made the remarks during a daily media briefing in response to the so-called “Six-monthly Report on Hong Kong” by the UK, which alleged that the Chinese government severely violated the "Sino-British Joint Declaration" and failed its commitment to "one country, two systems" by publishing the Hong Kong Security Law and disqualifying several members of the Legislative Council.

“It has been 23 years since Hong Kong's return to its motherland, and the British government is still making irresponsible remarks and unreasonable accusations against China on Hong Kong affairs by publishing the report,” Zhao said.

Zhao expressed strong dissatisfaction with the British government's periodic publication of the report and Britain’s incorrect way of meddling in Hong Kong affairs.

Since the return of Hong Kong, the central government of China has fully and faithfully implemented the policy of “one country, two systems” and “Hong Kong people administering Hong Kong,” ensuring that Hong Kong enjoys a high degree of autonomy and Hong Kong residents' lawful rights and freedoms have been protected.

“We urge the British side to abandon its colonial mentality, and put aside hypocrisy and double standards. They should stop interfering in the internal affairs of other countries and return to the right path of international law and basic norms of international relations as soon as possible,” Zhao stressed.