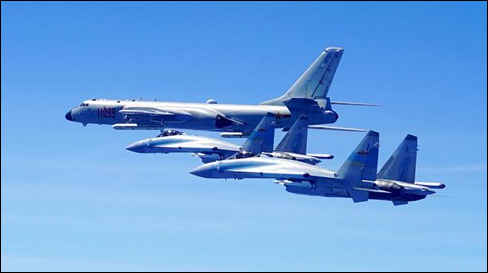 Provocations from the US around China's territorial waters have grown, and Chinese experts warned on Thursday that such actions will only increase the risk of military conflict and do nothing for regional stability and peace.The Chinese side has closely followed and fully grasped the situation of US warships traversing the Taiwan Straits, and the related department has lodged solemn representations, Lu Kang, a spokesperson of the Chinese Foreign Ministry said at a routine press conference on Thursday. Lu's remarks came after the US sent two naval vessels through the Taiwan Straits on Wednesday. "The Taiwan question is the most important and sensitive issue in China-US relations. We urge the US to abide by the one-China principle and the three joint communiqués between China and the US and handle them cautiously and properly, so as not to have a negative impact on Sino-US relations," Lu warned.Zhang Junshe, a senior research fellow at the PLA Naval Military Studies Research Institute, told the Global Times on Thursday that the US is trying to enlarge its military presence in the Asia-Pacific region under the guise of freedom of navigation, which violates international law and is doomed to fail. Li Haidong, a professor at the China Foreign Affairs University's Institute of International Relations in Beijing, told the Global Times that it is not surprising at all that the US will comprehensively put pressure on and provoke China not only in trade, but also in the field of security.The US is ready to sell its idea of Indo-Pacific strategy and probably launch accusations at China on security issues at the upcoming Shangri-La Dialogue in Singapore, so these actions are also creating an intense atmosphere for the US at the security forum on May 31, Li said.Aside from the Taiwan question, US politicians are also trying to hype issues related to other parts of China's territorial waters. US Senator Marco Rubio told the South China Morning Post that US senators from both political parties are expected to reintroduce an act on Thursday committing the US government to curb Chinese individuals and entities involved in activities in the South China Sea and East China Sea. China firmly opposes the proposal, which violates the basic norms of international law and international relations, Lu said on Thursday, adding, "we urge the US to refrain from promoting the review of relevant proposals and avoid further disrupting China-US relations." He noted that China's construction of islands and reefs on its own territory in the South China Sea is entirely within the scope of sovereignty.