CHINA China slams US over curb on tech visas

China slams US over curb on tech visas 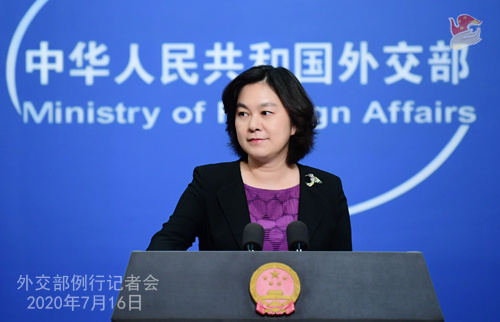 "As an outstanding private company, Huawei's only fault is that it's Chinese," Foreign Ministry spokeswoman Hua Chunying said at a daily news conference.

US Secretary of State Mike Pompeo, who announced the visa restrictions on Wednesday, has talked repeatedly over the past month about "clean" companies and countries that exclude Huawei from their 5G networks.

Instead of anything to do with "cleanliness", what the United States has done is a "dirty trick" and "dirty play", Hua said on Thursday.

Huawei has offered services to more than 170 countries, none of which has provided any evidence that its products posed a security threat or had back doors that allow interference, Hua said.

Huawei established a cybersecurity evaluation center in the United Kingdom for the UK to assess its products. The company also said it is willing to sign backdoor-free contracts with all countries.

"Can any US company ... do as Huawei did?" Hua asked, adding that the US "has long been carrying out indiscriminate and illegal surveillance on governments, companies and individuals in other countries, including its allies".

The US has been defaming and attacking Huawei out of a strong ideological bias and is rallying its allies in its attempt to besiege the company, she said.

Responding to Pompeo's attack on human rights conditions in China's Xinjiang Uygur autonomous region and his claims that Huawei provides "material support to regimes engaging in human rights abuses", Hua said such accusations constitute "the biggest lie of the century". As many as 56 ethnic groups live in harmony in China, where 850 million people have been lifted out of poverty, she said.

China also became the second-largest economy without resorting to warfare, colonialism or slavery, contributing more than 30 percent of global economic growth for over a decade, she said.

In contrast, the US, which "suffers racial discrimination everywhere", decimated its Native American population and has waged "groundless wars" in countries such as Iraq, Libya, Syria and Afghanistan.

Meanwhile, the UK lost its independence in making its own decisions when it chose to ban Huawei from its 5G network, Hua said, adding that the decision will cost the UK more than it will gain.

Huawei has created tens of thousands of jobs in the UK over two decades and contributed to the country's telecommunications infrastructure, she said, adding that London should listen carefully to reasonable voices and make a choice that complies with its long-term and fundamental interests.