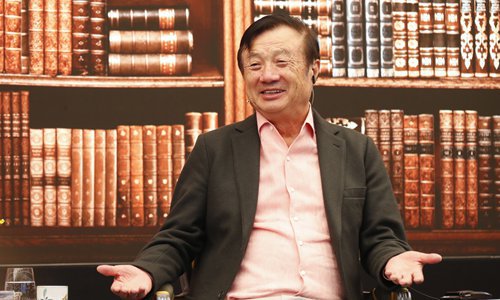 Ren Zhengfei, Huawei founder and CEO, at a livestreaming "A coffee with Ren" on Wednesday Photo: Courtesy of Huawei. (Photo: Global Times)

China has slammed comments by US Chief Technology Officer (CTO)  Michael Kratsios, saying he has slandered Huawei and his hyping of fake news is malicious and ill-intended.

The comments came after the US CTO accused Huawei of installing communications technology equipment at the headquarters of the African Union (AU) and hacking its computer system and transferring data. He made the comments during a speech at the Web Summit in Lisbon on Thursday

Such fake news was made up by some Western media, and it has been tossed into the garbage by Africa, China's Foreign Ministry spokesperson Geng Shuang told a briefing on Monday.

Geng pointed out that it's an open secret that the US has systemically spied on foreign governments, companies and individuals for a long time. The US owes the world an explanation, said Geng. The US should not overestimate its ability to slander others and underestimate others' judgment, Geng said.

Huawei refuted Kratsios' false claims. "Huawei did not control data at the African Union headquarters," read the statement published on the company's website.

China's Mission to the AU on Monday expressed strong dissatisfaction with and opposition to the US' attempt to incite discord between China and Africa.

"We are strongly dissatisfied with and opposed to" the comments, the mission said in a response that was posted to its website on Monday.