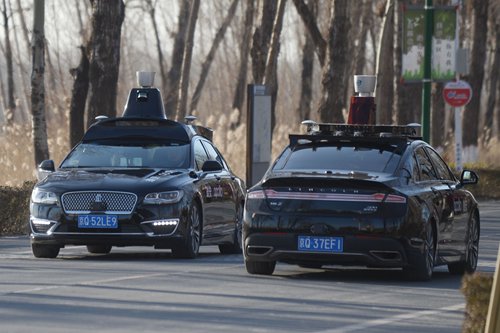 Baidu Inc has been given the green light by municipal authorities in Beijing to test the company's autonomous driving cars on the city's open roads, as the capital becomes only the second Chinese city to allow road tests of self-driving cars, the company said on Thursday.The move marked a major development in China's push to become a global dominating force in autonomous driving technologies, and it was also a big step in catching up with the US, where regulations on tests of self-driving cars on open city roads will reportedly be tightened after a fatal accident involving a driverless car.After conducting tests on the capability and safety features of Baidu's Apollo autonomous driving platform in closed-circuit areas, authorities in Beijing issued the city's first license for open road tests to Baidu, the company said in a statement sent to the Global Times.Following a ceremony, Baidu dispatched a fleet of five self-driving cars in a test on open roads in northwest Beijing, the statement said, adding that the licenses will give Baidu a boost in its development of autonomous driving technologies."[The issuance of the licenses] means self-driving cars are officially entering the open road test phrase and this will help Baidu and other companies to move faster in research and development of autonomous driving," the statement said.On March 1, Shanghai authorities issued two open road test licenses to Shanghai-based SAIC Motor Corp and electric vehicle start-up NIO, the Xinhua News Agency reported.Two other cities - Southwest China's Chongqing Municipality and Shenzhen in South China's Guangdong Province - have also released regulations on road tests of self-driving cars, though these cities have not yet issued licenses, according to media reports.Zeng Zhiling, an analyst at Shanghai-based consultancy LMC Automotives, said these moves are part of China's rush to gain full mastery of autonomous driving technologies."The government has set a deadline to reach level 3 autonomous driving by 2020 and level 5 by 2025. That is a very tight timeline, so we do have to move forward fast" both in terms of technology and regulations, Zeng told the Global Times on Thursday.Widely accepted standards divide autonomous driving into five levels. Level 3 cars are capable of taking full control when certain conditions are met, while level 5 cars can operate itself in all conditions.China has listed autonomous driving as a key sector under the broad "Made in China 2025" initiative that aims to transfer China into a manufacturing powerhouse of advanced products. Baidu has been included in a list of artificial intelligence (AI) industry leaders, known as China's AI national team, by the Ministry of Science and Technology."To meet these goals, we have a lot of catching-up to do because we are already four to five years behind the US in open road tests," Zeng said.However, some experts said that after a pedestrian was killed by a self-driving car operated by ride-hailing services provider Uber in a test in Arizona on March 18, US regulations could be tightened for road tests. After the accident, Boston put its self-driving car testing program on hold and started to review regulations.Some media reports have suggested that the tightening US regulations over self-driving car tests could give China a chance to catch up in an increasingly heated competition between the countries.But experts said that the regulatory changes would not slow the US' effort in self-driving car development and that Chinese companies still have a way to go to catch up.Wang Xin, who runs an influential online auto news site known as Auto Prophet, said that some Chinese companies such as Baidu are still adding self-driving features to traditional vehicles, while self-driving cars could be a whole new concept in mobile solutions."At the moment, the idea of self-driving cars is about putting sensors and cameras on top of a traditional car. They just want to make money in the car industry… that's meaningless," Wang told the Global Times  Thursday. "The core of autonomous driving is not about cars."