China strikes back against US' irresponsible comments on Jimmy Lai's case

The Office of the Commissioner of the Chinese Foreign Ministry in the Hong Kong Special Administrative Region (HKSAR) on Sunday strongly disapproved of and firmly rejected the irresponsible comments of a spokesperson of the US State Department and a few US congressmen on a Hong Kong court's law-based ruling against former media tycoon Jimmy Lai Chee-ying, urging the latter to stop interfering in China's domestic affairs. 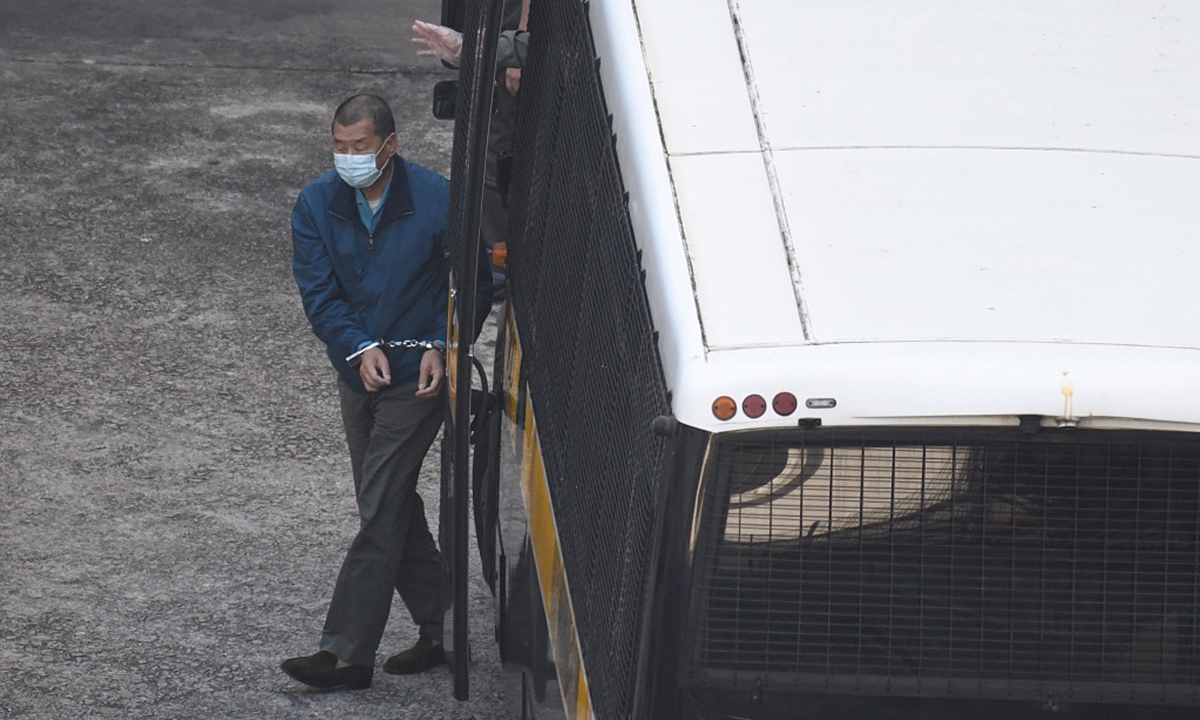 A Hong Kong court on Saturday sentenced Lai, an instigator of the Hong Kong riots in 2019, to five years and nine months in prison over two fraud charges linked to lease violations.

In a statement on Sunday, US State Department spokesperson Ned Price called the sentencing a "grossly unjust outcome," and said "this result is neither fair nor just." Price called on Chinese authorities "to respect freedom of expression" in the statement.

In response, the Office of the Commissioner of the Chinese Foreign Ministry in the HKSAR said on Sunday that "rights and freedoms can't be used as an immunity passport for lawbreakers, or a privilege for anti-China forces."

"In Jimmy Lai's fraud case, the evidence is clear, the procedure is law-based, and the judgment is open and transparent. The trial by the HKSAR court is totally legitimate and lawful, and it brooks no interference or reproach," the office noted.

The office said that the US can't wait to jump to put a label of "not respecting press freedom" on the HKSAR government and the Chinese government, but this only reveals Lai's identity as an agent and pawn of the US.

The Hong Kong court ruled that Lai had violated the terms of the lease for Apple Daily's headquarters by concealing the operations of Dico Consultants Limited (Dico) from the landlord, the Hong Kong Science and Technology Park Corporation, from April 1, 1998, to May 19, 2020. The lease had specified that the premises should be used for printing and publishing newspapers or magazines only, media said.

Lai was also fined HK$2 million ($256,850) calculated by the possible rent that the consultancy company had saved by not having to pay market-level rent, media said.

The US' reaction is not unexpected, Lau Siu-kai, a deputy head of the Chinese Association of Hong Kong and Macao Studies, told the Global Times on Sunday.

Lau said that such a reaction won't work, but, on the contrary, demonstrates the special relationship between the US and Lai, and it allows Hong Kong residents to have a clearer understanding of external forces' conspiracy over Hong Kong. It also lets secessionists understand that it brings about more harm than good to rely on external forces.

Lai's case will serve as an alert to youngsters, Lau said.

Hong Kong is never a forum for foreign intervention. The US official should not interfere in the judicial system of another jurisdiction. Lai's case was handled through a fair trial. He received a verdict and was convicted and sentenced in accordance with the Hong Kong laws, Chu Kar-kin, a veteran current affairs commentator based in Hong Kong and member of the Chinese Association of Hong Kong and Macao Studies, told the Global Times on Sunday.

Ned Price should keep his mouth shut and should not comment on Hong Kong's domestic affairs. Such an intervention implicitly tells the world who is the mastermind behind the local culprits.

Lai is also facing a national security trial, which was adjourned to December 13 after the HKSAR government asked the central government to interpret the National Security Law for Hong Kong, as Lai's defense team hiring an overseas lawyer has sparked controversy.