HEFEI, Oct. 26 (Xinhua) -- Autumn is usually the off-season for coal production, but for Sun Xupeng, a coal mine worker in east China's Anhui Province, the off-season this year has been much busier than the peak season. 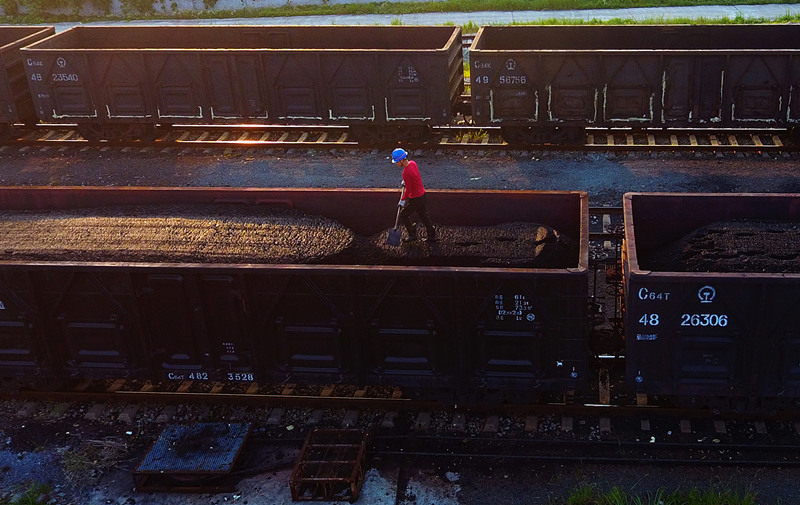 "We have been seeing five to six trains loaded with coal depart for power plant each day since early October. Around 15,000 tonnes of coal have been transported daily, an increase of 20 percent from the previous three quarters," said the 50-year-old Sun, who has been working in the Dingji Coal Mine located in the province's Huainan City for 10 years.

Coal extracted from the mine will be sent to Tianji Power Plant, which transmits electricity to eastern Shanghai Municipality and Zhejiang and Jiangsu provinces.

To mitigate the recent coal supply crunch, regions across China have adopted a raft of measures to stabilize energy supply and expand coal production capacity.

At present, some 153 coal mines have met emergency supply qualifications, which can help increase coal production capacity by 220 million tonnes per year, according to the National Mine Safety Administration.

"Energy supply can be guaranteed this winter and next spring," said Zhao Chenxin, secretary general of the National Development and Reform Commission, at a press conference previously.

While ensuring energy supply, China is also promoting the clean use of coal and boosting the development of new energy in an effort to achieve its goal on carbon emission.

"We will make sure that the goals of peaking carbon emissions and achieving carbon neutrality are achieved as scheduled while ensuring the domestic energy supply," Zhao said.

Affiliated to Huaihu Coal & Power Co., Ltd., Dingji Coal Mine and Tianji Power Plant have been playing an important role in transmitting electricity from Anhui to power-thirsty east China. Like many other coal and power enterprises in China, the company is now striving to conserve energy and cut carbon emissions while securing coal and power supplies.

"We have used the coal-bed gas and waste heat to generate electricity and recycled the coal gangue to make brick, and increased coal recovery rate with an intelligent system," said Li Ming, Party secretary of Dingji Coal Mine.

"The power plant has upgraded the equipment and technologies to cut coal consumption of the power unit and reduce emissions of smoke, sulfur dioxide and nitrogen oxide," said Chen Wei, vice director of Tianji Power Plant.

Meanwhile, this power plant has set foot in the photoelectricity arena, with the annual power generation capacity of its photovoltaic project reaching 7 million kilowatt-hours.

"The shortage of coal supply is temporary, while the efforts to cut carbon emissions and develop clean energy will never stop," said Wang Xiaobo, chairman of the company.

Industry insiders believe that with the introduction of policies to ensure energy supply and control coal prices, the power shortages will be alleviated.