BEIJING, July 22 (Xinhua) -- China on Wednesday strongly condemned the U.S. request to close the Chinese Consulate General in Houston, saying the move was a political provocation unilaterally initiated against China by the U.S. side. 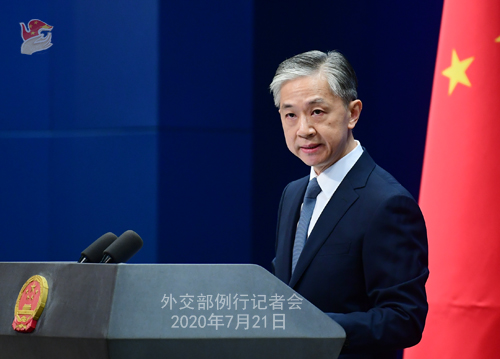 On July 21, the U.S. side abruptly requested the Chinese side to close its Consulate General in Houston. Such a move "seriously violates international law and basic norms governing international relations, seriously violates the bilateral consular agreement between China and the United States, and deliberately undermines Sino-U.S. relations. It is outrageous and unjustified," Chinese Foreign Ministry spokesperson Wang Wenbin said at a regular press conference.

"China urges the U.S. side to immediately revoke the wrong decision, or China will definitely make legitimate and necessary reactions," said Wang.

For a period of time, the U.S. government has repeatedly shifted blame to the Chinese side, stigmatized and attacked China, made unprovoked attacks on China's social system, and deliberately put obstacles in the way of Chinese diplomatic and consular staff in the United States. In the meantime, the U.S. side has also intimidated, interrogated Chinese students studying in the United States, confiscated their personal electronic devices, and even detained them for no reason, noted Wang.

"The unilateral closure of China's Consulate General in Houston within a short period of time is an unprecedented escalation of its recent actions against China," said Wang.

"The Chinese diplomatic missions in the United States have always been committed to promoting mutual understanding and friendship between the Chinese and American peoples," said Wang, noting that China has always adhered to the principle of non-interference in the internal affairs of other countries. Infiltration and interference in other countries' internal affairs have never been the genes or traditions of China's diplomacy.

Wang said the facts are clear who are interfering in the internal affairs of other countries and who are engaging in infiltration and confrontation.

Wang said the U.S. side claims that there is no reciprocity in the U.S.-China relations, but this is just an old and meaningless excuse of the United States. He stressed that "in fact, in terms of the number of diplomatic and consular missions in each other's country and the number of diplomatic and consular personnel, the U.S. side far exceeds China."

"We urge the U.S. side to immediately withdraw this erroneous decision. Should it insist on going down this wrong path, China will react with firm countermeasures," Wang said.