China has successfully transplanted organs from pigs to three rhesus monkeys, with one surviving for 16 days so far, a record-breaking duration. 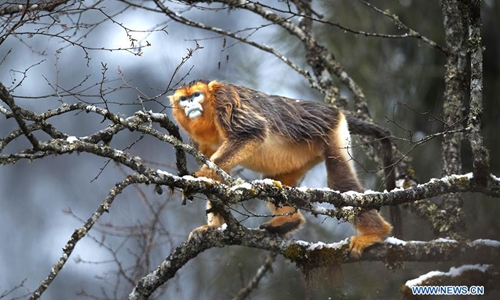 A Sichuan golden snub-nosed monkey is seen on trees of Jiajin Mountain in Baoxing County, southwest China's Sichuan Province, March 5, 2020. Rangers in the county on Thursday morning found more than 100 Sichuan golden snub-nosed monkeys playing and foraging for food in the snow. The monkeys are under top-level protection in China. More than 800 from nine populations were living in Baoxing, according to a survey conducted in 2014. (Photo: Xinhua)

A research team from Air Force Medical University of the People's Liberation Army announced on Monday that it had transplanted a liver, heart and kidney from a pig to three rhesus monkeys, using the PERV knockout method.

Currently, the monkey who received the transplanted liver has lived for 16 days, marking the longest survival period for a liver transplant operation between a monkey and a pig.

After the three operations, the three organs have been working perfectly inside the receivers' bodies; the transplanted liver soon had gall simmering from it, and the heart began bouncing powerfully after being transplanted into the monkey.

The monkey who received the heart transplant survived for seven days, while the one who got the kidney from the pig lived for only one day.

Shortage of organs is a universal problem that slows the development of organ transplantation. Organ transplantation between different species faces great obstacles, ranging from difficulty for receivers to comply with the transplanted organs to use of medicine and post-operation care.

The operation has laid the foundation for clinical experiments on xenotransplantation, said the research team.