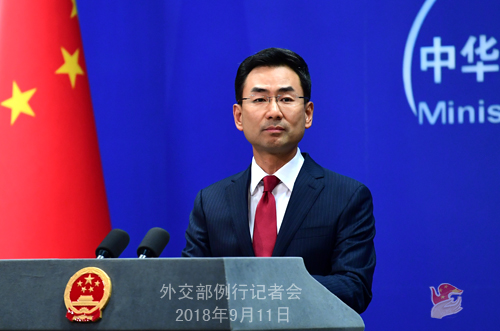 China supports dialogue and negotiation between the US and the Democratic People's Republic of Korea (DPRK), Chinese Foreign Ministry spokesperson Geng Shuang said Tuesday at a routine press briefing.

This came after the White House announced on Monday that it has received a letter from Kim Jong Un, the top leader of DPRK about requesting another meeting with US President Donald Trump.

Describing the letter as "warm" and "positive," the White House Press Secretary Sarah Sanders told reporters in a briefing Monday afternoon that the primary purpose of the letter was to look to schedule a second meeting between the two leaders.

The White House was "open to" the meeting and is already "in the process of coordinating that," Sanders added.

"The Chinese side is pleased with positive interactions between the US and the DPRK," Geng said, stressing that continuation of an eased situation and progress in peaceful talks on the Korean Peninsular "suit all concerning parties' interests" and "meet the expectations of the international community".

Saying the Chinese side supports and anticipates the US and the DPRK to implement the consensus reached by their leaders, Geng called on the two sides to enhance dialogue and negotiation and push forward denuclearization and political settlement of the Peninsular issue, so as to witness more positive outcomes.