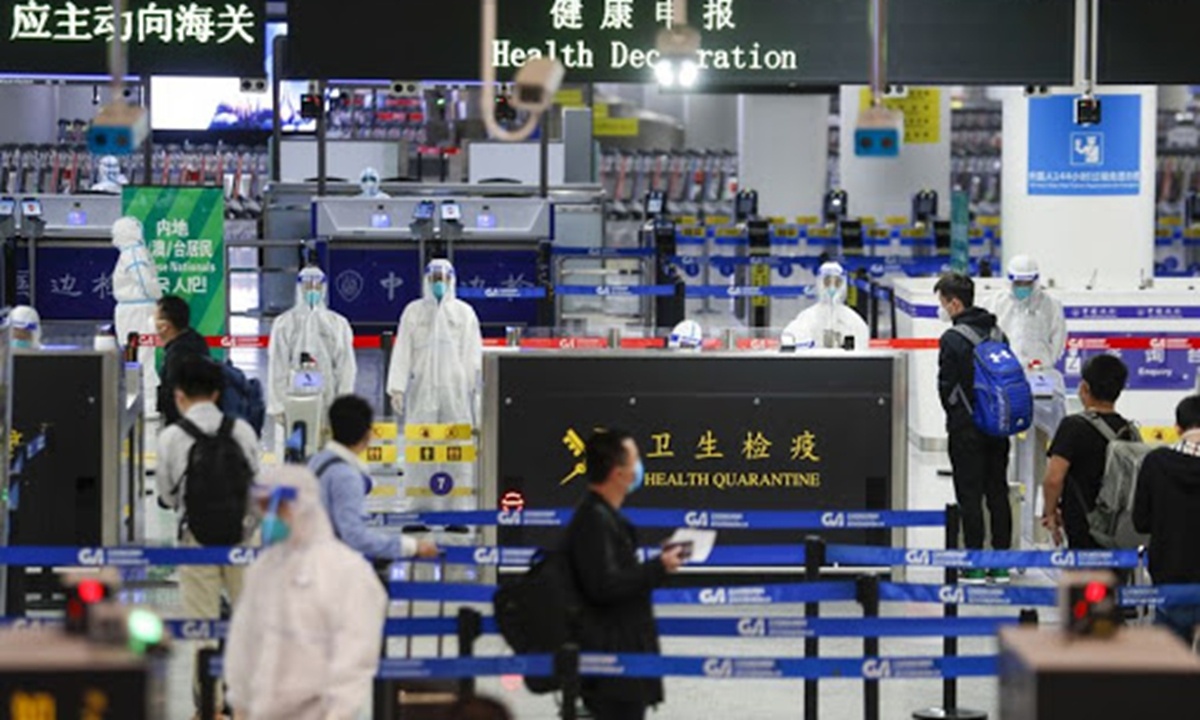 China has decided to suspend the entry of non-Chinese nationals from countries including Italy, Russia, and India due to the worldwide coronavirus resurgence, and public health experts noted further restrictions and stricter policies could come if the pandemic does not ebb overseas.

According to Chinese embassies in corresponding countries, the restriction applies to non-Chinese nationals who hold a valid visa and residence permit for work, private affairs and family reunions to China.

China has so far introduced the restriction to Italy, Russia, India, the UK, France, the Philippines, Belgium, Ukraine and Bangladesh.

Public health experts noted the policy is necessary amid the world's coronavirus rebounding that has brought about great pressure on the epidemic control work in China, which is on high alert of imported cases, as the weather cools and respiratory diseases tend to increase.

"If other countries fail to curb the contagion, similar restrictions to more countries are very likely," Yang Zhanqiu, a Wuhan-based virologist, told the Global Times on Friday.

China is forced to safeguard its hard-won environment of normal business and social life as "we cannot pay the price for another pause of everything like that in early 2020," Yang said.

China is facing a mounting risk of imported coronavirus infections, with cases reaching 515 in October, up 45 percent from the previous month. There have also been sporadic domestic outbreaks in Qingdao and Kashi, Chinese Foreign Ministry said on Friday.

Tightening policies for personnel visiting China is not only to safeguard the fruits of hard-won domestic control, but also to help protect people from the risk of infection during their journey, ministry spokesperson Wang Wenbin said.

The UK is facing one of the most severe resurgences among all of the restricted countries, reporting roughly 20,000 cases a day. A new national lockdown took effect on Thursday and is set to run until December 2.

On Tuesday, 23 Indian nationals, 4 confirmed and 19 asymptomatic patients, were reported after they arrived in Wuhan, Central China's Hubei Province, via air travel.

Analysts believe another concern, in addition to rising imported cases, was that China needs to save epidemic control capacity, such as medical staff and hospital beds, as preparation for a potential domestic second-wave.

The current visa policy stipulates that entry for holders of diplomatic, service, courtesy or C visas will not be affected and people holding visas issued after November 3 are exempt from the restriction. Foreign nationals who need to visit China for emergency reasons can apply for visas, according to embassies.

The Chinese Foreign Ministry, at Thursday's routine press conference, said such policy is only a temporary measure in response to the spike in COVID-19 cases in those countries; it is both reasonable and in line with international practice.

The policy disturbed some people's travel plans, sparking understandable discontent. However, although upsetting for some people hoping to come to China, it will be understood by the general public, ministry spokesperson Wang Wenbin said.

Chinese analysts also urged all governments to take action to protect their people from the virus and help resume normal international personnel exchanges.