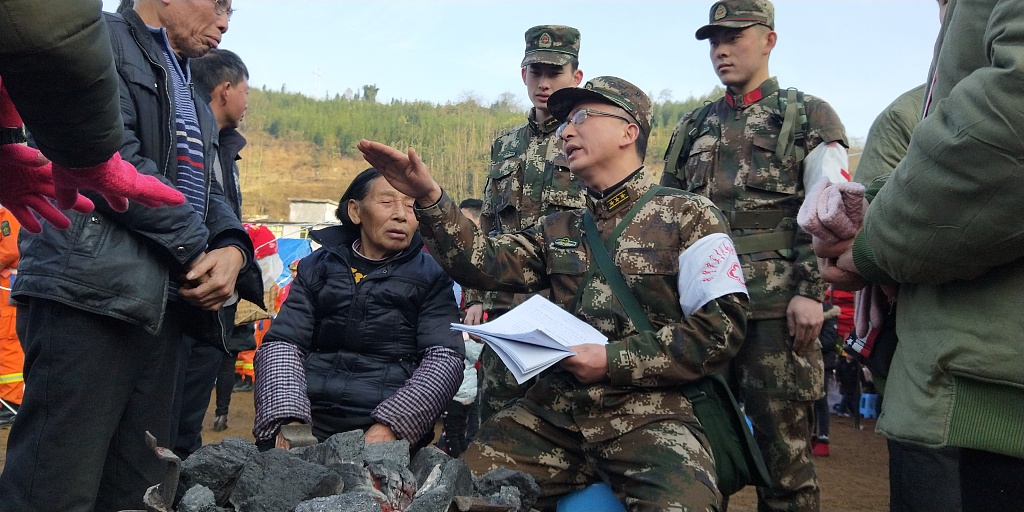 CHENGDU, Dec. 19 (Xinhua) -- Four hours after a magnitude-5.7 earthquake damaged his house, Hong Kaishi was evacuated to a safe place and given a quilt, bedsheet and bowl of steaming hot noodles.

Governments at all levels have responded quickly to the disaster.

Emergency responses at national and local levels were immediately activated. The Ministry of Emergency Management sent a working team to guide and assist rescue work. The county established a disaster relief center to coordinate rescue efforts.

Four relocation sites had been set up in the county as of Monday. A team of 325 rescuers, dispatched by the Sichuan provincial fire brigade, helped evaluate 1,229 people from disaster-hit areas, according to the ministry.

About 2,000 cotton tents, 600 quilts and 400 coats have been sent to the quake-impacted residents to help them withstand rain, snow and low temperatures.

To prevent secondary disasters, Sichuan has also sent specialists to conduct a safety assessment of the infrastructure, including traffic, electrical grids and telecommunications.

The quick response to the earthquake is indicative of China's ever-improving emergency response system.

In early November, a landslide struck the junction of Sichuan and Tibet and blocked a section of the Jinsha River, the upper reaches of the Yangtze River, causing the formation of a barrier lake and threatening the safety of local residents.

Despite the high altitude, freezing weather and poor traffic conditions, first responders evacuated around 6,000 people in Sichuan and 8,300 more in Tibet within one day of the landslide.

A joint working team made a plan to construct a drainage channel to discharge water from the dangerous barrier lake. Drilling machines, excavators and loaders required for the operation were quickly transported to the disaster-hit area.

After days of hard work, water levels of the Jinsha River returned to normal.

"Cooperation between different departments has been key to our effective emergency response," said Duan Yijun, head of the Sichuan provincial emergency management department.

The Ministry of Emergency Management was formed in April, integrating the functions of several departments to improve the response efficiency to natural disasters and major workplace accidents.

China has long been vulnerable to natural disasters such as earthquakes, landslides and snowstorms.

Shan said China's emergency response system and capacity-building had improved, with the experience gained from the country's disaster relief efforts in the past decade after the devastating Wenchuan earthquake in 2008 which killed nearly 70,000 people.

Advanced technology has also played a key role in the country's emergency warning and response systems. A new generation of earthquake monitoring and warning systems have been installed.

"The emergency management system cannot be built overnight, but needs to be constantly improved. The final goal is to minimize casualties and losses," Shan said.