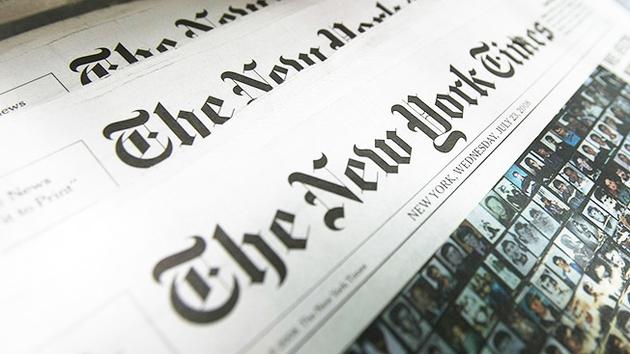 BEIJING, March 18 (Xinhua) -- China on Wednesday announced countermeasures against restrictive measures on Chinese media agencies in the United States, according to an official statement.

The statement said that in recent years, the U.S. government has placed unwarranted restrictions on Chinese media agencies and personnel in the United States, purposely made things difficult for their normal reporting assignments, and subjected them to growing discrimination and politically motivated oppression.

Such outrageous treatment prompted strong representations from China. China firmly objected to and strongly condemned the U.S. move, and stressed its reserved right to respond and take actions, said the statement.

First, in response to the U.S. designation of five Chinese media agencies as "foreign missions", China demands, in the spirit of reciprocity, that the China-based branches of Voice of America, the New York Times, the Wall Street Journal, the Washington Post and Time declare in written form information about their staff, finance, operation and real estate in China.

Second, in response to the United States slashing the staff size of Chinese media outlets in the United States, which is expulsion in all but name, China demands that journalists of U.S. citizenship working with the New York Times, the Wall Street Journal and the Washington Post whose press credentials are due to expire before the end of 2020 notify the Department of Information of the Ministry of Foreign Affairs within four calendar days starting from Wednesday and hand back their press cards within 10 calendar days. They will not be allowed to continue working as journalists in the People's Republic of China, including its Hong Kong and Macao special administrative regions.

Third, in response to the discriminatory restrictions the United States has imposed on Chinese journalists with regard to visa, administrative review and reporting, China will take reciprocal measures against American journalists.

The statement said that the above-mentioned measures are entirely necessary and reciprocal countermeasures that China is compelled to take in response to the unreasonable oppression the Chinese media organizations experience in the United States. They are legitimate and justified self-defense in every sense.

The U.S. moves exclusively targeting Chinese media organizations were driven by a Cold War mentality and ideological bias. It has seriously tarnished the reputation and image of Chinese media organizations, seriously affected their normal operation in the United States, and seriously disrupted people-to-people and cultural exchanges between the two countries. It has therefore exposed the hypocrisy of the self-styled advocate of press freedom, the statement said.

"China urges the United States to immediately change course, undo the damage, and stop its political oppression and arbitrary restrictions on Chinese media organizations. Should the United States choose to go further down the wrong path, it could expect more countermeasures from China," the statement read.

The statement said that China's fundamental state policy of opening up has not changed and will not change. "Foreign media organizations and journalists who cover stories in accordance with laws and regulations are always welcome in China, and will get continued assistance from our side."

"What we reject is ideological bias against China, fake news made in the name of press freedom, and breaches of ethics in journalism. We call on foreign media outlets and journalists to play a positive role in advancing the mutual understanding between China and the rest of the world," the statement said.