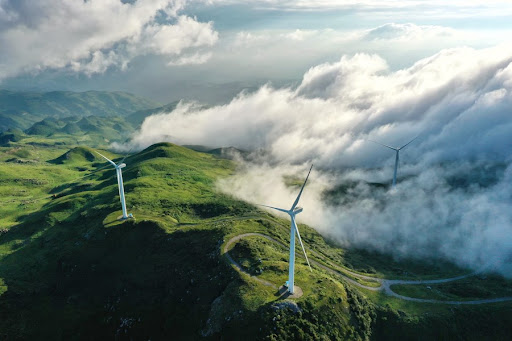 BEIJING, Oct. 27 (Xinhua) -- China has formulated and implemented a variety of strategies, regulations, policies, standards and actions to meet its targets in response to climate change, said a white paper released Wednesday.

As the largest developing country with a population of over 1.4 billion, China faces major challenges, including economic development, improving the people's lives, pollution control, and eco-environmental protection, according to a white paper titled "Responding to Climate Change: China's Policies and Actions."

China has risen to these challenges to implement positive and effective moves in its strategy to peak carbon emissions and achieve carbon neutrality, said the white paper released by the State Council Information Office.

China's Outline of the 14th Five-Year Plan (2021-2025) for National Economic and Social Development and the Long-Range Objectives Through the Year 2035 set a binding target of slashing carbon intensity by 18 percent from 2020 to 2025, according to the white paper.

In 2015, China set its nationally determined action objectives by 2030: to peak carbon dioxide emissions around 2030 at the latest and make every effort to peak early. By the end of 2019, China had delivered on its 2020 climate action target ahead of schedule.

In 2020, China announced new targets and measures. It aims to peak carbon dioxide emissions before 2030 and achieve carbon neutrality before 2060, and lower its carbon intensity by over 65 percent by 2030 from the 2005 level.

China has announced in 2021 a decision to stop building new coal-fired power projects overseas, demonstrating its concrete actions in response to climate change.

Other measures against climate change include staying committed to a green and low-carbon path to development, tightening control over greenhouse gas emissions, giving full play to the role of the carbon market, and increasing green finance support.