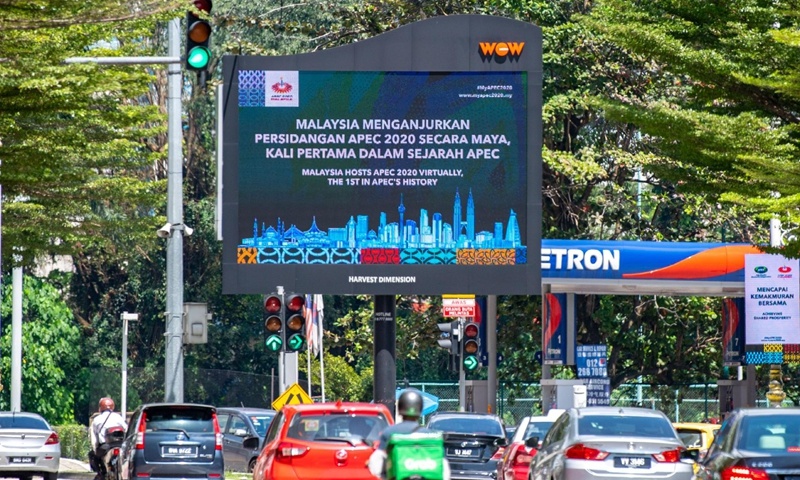 A billboard promoting the Asia-Pacific Economic Cooperation (APEC) meeting is seen in Kuala Lumpur, Malaysia, on Nov 18, 2020. The APEC Economic Leaders' Meeting will be virtually held on Nov 20. (Photo: Xinhua)

China has taken the spotlight at one of the biggest diplomatic and economic platforms in the Asia-Pacific region, as Chinese President Xi Jinping used a keynote speech on Thursday to highlight China's "major strategic achievement" in fighting the COVID-19, and called on the region to choose openness over seclusion - all while the US, which has traditionally played a leadership role on such occasions, has remained noticeably silent amid a confluence of domestic crises.

In his speech at the Asia-Pacific Economic Cooperation (APEC) CEO Dialogue via video link, the Chinese president also stressed that China will not pursue "decoupling" or form a small circle to keep others out, in an apparent reference to some US officials' call for economic decoupling and ill-attempt to form alliances to contain China's rise. No US official spoke at the dialogue, and it remains unclear whether US President Donald Trump will attend the leader's summit on Friday, where Xi is scheduled to deliver another speech.

The stark contrast of the two economic powers' presence as the APEC also put on vivid display the changing dynamics in regional and global leadership, with China's profile rising substantially powered by its steady domestic situation and continued opening-up, and the US' once dominant role declining remarkably as it took an inward approach under Trump, and is battered by domestic political and social divisions, Chinese experts noted. With the new dynamic at the meeting, regional leaders are aiming for a better outcome than previous years with the US, officials and experts added.

Before the main event, the APEC Leaders' virtual meeting, on Friday, Xi set the tone with a speech at the CEO dialogue on Thursday morning that the Asia-Pacific region should promote regional cooperation not just on fighting the pandemic but also advance trade and investment liberalization, amid what he calls "changes unseen in a century" and "mounting unilateralism, protectionism and bullying."

"Openness enables a country to move forward, while seclusion holds it back. In today's world where economic globalization has become an irreversible trend, no country can develop by keeping its doors closed," Xi said via video link, stressing that China will not reverse course or run against the historical trend by "decoupling" or forming a small circle to keep others out.

Even though the "decoupling" reference was apparently aimed at the US, there was no US official listed as speaker at the CEO dialogue, which was attended by Malaysian Prime Minister Muhyiddin Yassin, Singapore Prime Minister  Lee Hsien Loong and New Zealand Prime Minister Jacinda Ardern, among other speakers.

The US government has not announced its delegation to the leaders' virtual meeting, though Reuters reported, citing unnamed source, that Trump, who has only attended the meeting once in 2017, plans to participate. Trump also skipped the East Asia Summit last week, when China and 14 other Asia-Pacific economies signed the Regional Comprehensive Economic Partnership (RCEP), the world's biggest trade pact, without the US.

China's growing role and the US' diminished participation at the APEC meetings underscored the changing leadership of the two countries in regional and global affairs, driven primarily by the two countries domestic situations, said Mei Xinyu, a research fellow at the Chinese Academy of International Trade and Economic Cooperation.

"The change is not because the US has completely lost its global dominance but because it is in the middle of domestic chaos, while China remains steady and unified domestically," Mei told the Global Times on Thursday, adding that other countries "should clearly see which of the two systems could ensure steadiness and effectiveness, not just domestically but also globally."

Beyond the US' current crisis, including a seemingly out-of-control COVID-19 pandemic and ugly dispute over the result of the presidential election, regional leaders are appearing to also look passed the current US administration to anticipate what the Singaporean Prime Minister called the "more multilateral" Joe Biden administration.

APEC, which has 21 member economies, is a main forum to push for regional trade and investment liberalization. But in the last couple of years, it has failed to produce concrete plans. In 2018, the leaders' summit could not even agree on a final communiqué due to US disruption. The meeting was canceled in 2019, after the host country Chile faced social unrest.

But with the US' limited participation, momentum from the signing of the RCEP and pressing challenges posed by the COVID-19, officials and experts are expecting the summit to reach better outcomes than in previous years.

"We will hopefully see some encouraging outcome this year, and the focus will be on cooperation and health, addressing the challenges posed by the pandemic," Hew Tse Hou, consul general of Malaysian Consulate in Shanghai, told the Global Times on Thursday, adding the meetings, though to be held virtually due to COVID-19, work "quite well."

Among the top agenda and possibly major outcomes of the leaders' meeting is the adoption of the region's Post-2020 Vision, a key policy document that will determine the role of APEC, and paths for cooperation among member economies in the coming years. There were many differences over the content of the vision, particularly between China and the US, according to officials and experts.

But during his speech on Thursday, Xi said that "thanks to the participation of all economies concerned, the APEC Post-2020 Vision has been formulated, which sets out ambitious goals and important guidelines for our future cooperation."

Beyond the long-term vision, regional officials are also aiming for concrete plans for member economies to jointly fight the COVID-19, develop a vaccine for the deadly virus, and speed up the economic recovery from the pandemic.

"We hope that every country will work together to save the economy during the pandemic, and each of the countries will have to work closely together in terms of achieving the main vaccine," Steven Cheng, consul of the Malaysian Consulate in Shanghai, told the Global Times, adding that the host country welcomes investments in vaccine development.

While much of the Asia-Pacific region has effectively reined in the COVID-19 pandemic and is leading the global recovery from the COVID-19 pandemic, "the economic recovery in the APEC region will not be complete until international travel and tourism flourish once again," Moody's Analytics said in a note sent to the Global Times on Thursday.

Experts also noted that further cooperation is necessary to ensure the steady recovery of regional economies, and warned of potential disruption to cooperation caused by the outgoing Trump administration.

"After the defeat, Trump appears uninterested in anything. He might send [Vice President Mike Pence] or [Secretary of State Mike Pompeo]… if it's Pompeo, then he is really coming to mess things up," Zhao Gancheng, director of the Center for Asia-Pacific Studies at the Shanghai Institute for International Studies, told the Global Times.

"However, that will not stop China from keeping holding high the banner of regional cooperation, because the international community has its own views on right and wrong," Zhao said.