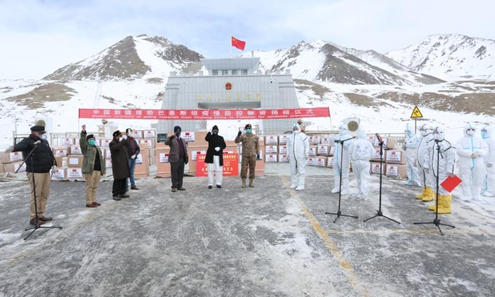 The Khunjerab Pass, with the altitude of more than 4,700 meters, is reported to be the highest port in the world. It closed from December 1 to March 31 due to the cold weather.

According to Pakistan's newspaper Dawn, the Khunjerab Pass, which usually opens on April 1, opened on Friday to transfer medical supplies from China to Pakistan.

A spokesperson of the Chinese Embassy to Pakistan told the Global Times on Friday that "Pakistan is facing a severe challenge of the COVID-19. This batch of assistance from China is urgently needed by Pakistan.

The Xinjiang regional government took the responsibility of purchasing and transferring. China and Pakistan made the decision within three days to temporarily open the Khunjerab Pass and send two tons of medical supplies to Pakistan."

The Kashi government quickly accomplished the preparation work on the Chinese side - including customs clearance, cleaning the roads and coordination work, which ensured the smooth transfer, the spokesperson said.

The Embassy made a livestream of the event on Friday, with hundreds of netizens praising and making comments.

According to a screenshot of the livestream, there was a road swept by working staff on the snowy-capped Khunjerab Pass and a donation ceremony in front of the port.

A netizen named AmjadSohail said that "A friend in need is a friend indeed!" Another netizen JamshedKhokhar said that "there is an old saying in China that "the grace of dripping water should be reciprocated by a gushing spring. China and Pakistan share the same views. China-Pakistan friendship stands forever!"

Some netizens also said that China's assistance help cement Pakistan's confidence of defeating the virus and "with the reliable support, nothing is undefeatable!"

Sherry Rehman, PPP Parliamentary Leader in the Pakistan senate, appreciated China's support through good and bad times, according to a tweet she posted on Friday.

This was the second time that Xinjiang region has provided assistance to Pakistan since the COVID-19 outbreak. The aid materials include 200,000 medical masks, 2,000 N95 masks, 2,000 medical protective clothing, and 2,400 test kits as well as five ventilators, the Global Times learned.

On March 20, Xinjiang donated 100,000 medical masks to Pakistan through the Chinese Embassy to Pakistan.

National Disaster Management Authority (NDMA) Chairman Lt. Gen. Muhammad Afzal revealed that there are around 2,200 ventilators across Pakistan at the moment, according to local media dawn.com. Only around half of them would be available if needed for COVID-19 patients, the report said.

"Unfortunately, nothing is available anywhere except in China," he was quoted as saying in the report.

Pakistan has seen the number of coronavirus infections surge to 1,179 as of Thursday and nine deaths, according to media reports. The hardest-hit region Sindh has ordered a lockdown to contain the further spread of the disease, and the Punjab government also announced a lockdown in the province.

According to the plan, the Chinese government medical team and a new batch of aid materials sent from Xinjiang will arrive in Islamabad, capital of Pakistan, on Saturday.