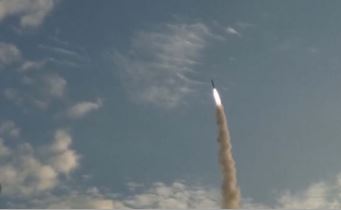 China has successfully developed and tested a cutting-edge hypersonic aircraft that rides its own shock waves, according to the China Daily Monday.

The first flight-test of Starry Sky 2, a hypersonic experimental waverider vehicle, was successfully conducted at an unidentified testing field in northwestern China last Friday, the newspaper cited the China Academy of Aerospace Aerodynamics as saying.

A waverider is a hypersonic aircraft that has a wedge-shaped fuselage designed to improve its supersonic lift-to-drag ratio by using the shock waves generated by its own flight as a lifting force.

The hypersonic vehicle was first carried by a solid-propellant rocket and then separated as its own propulsion system took over. During the independent flight, the test craft maintained ultrafast speeds above Mach 5.5 for more than 400 seconds and reached 7,344 km/h, the newspaper said, quoting a statement from the academy.

In the flight-test, the Chinese waverider reached an altitude of 30 km and carried out large-angle maneuvers. The vehicle also tested a host of advanced technologies such as a domestically developed heat-balance thermal protection system.