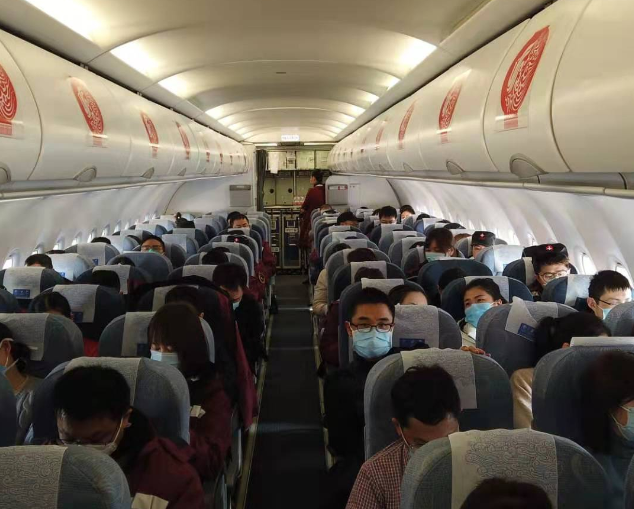 The first batch of Sichuan aid workers on a chartered Air China plane headed to the quarantine zone in Wuhan. (Photo: CGTN)

Motegi said the Japanese side pays tribute to the positive and powerful measures taken by the Chinese government and people under the leadership of President Xi Jinping to resolutely control the spread of the new coronavirus epidemic.

A friend in need is a friend indeed, Motegi said, adding that Japan stands ready to work with China to deal with the threat of the epidemic and provide all-round support and assistance to China.

One million masks donated by the Japanese people have arrived in China's southwestern city of Chengdu and were rushed to Wuhan, according to Sichuan Airlines.

Motegi told reporters on Sunday after the call that about 430 Japanese nationals have been confirmed to be living or staying in Hubei Province, with almost all of them in Wuhan.

Prime Minister Shinzo Abe said earlier the government was working with Chinese authorities to make arrangements, including charter flights, for all Japanese nationals wishing to return to Japan. Motegi said no schedule had been set yet.

President Xi has repeatedly given important instructions on the prevention and control work and held a meeting in person on the first day of the Lunar New Year for redeployment and remobilization, Wang said.

Wang noted that China has built an all-round and multi-level prevention and control system focusing on the city of Wuhan and Hubei Province, from the central government to the local level.

All aspects of work are open and transparent and progress is being accelerated in a scientific and orderly manner, he said.

The Chinese nation has gone through great winds and waves and overcome countless difficulties, he said. "We believe that under the leadership of the Communist Party of China and the Chinese government, the people of the whole country will unite as one, and be fully capable and confident to win this battle of epidemic prevention and control at an early date," Wang said.

Combating the spread of the epidemic is a common concern of the international community, Wang said, noting that China is willing to work with other countries in the world, including Japan, to actively respond to the epidemic.

China has informed the World Health Organization (WHO), relevant countries and Hong Kong, Macao and Taiwan regions of the latest epidemic situation, and has shared information on the virus genome sequence with all parties in a timely manner, Wang said.

An expert group from the WHO has arrived for the field visit in Wuhan and highly praised the effective measures taken by China to deal with the epidemic, said Wang, adding that the director-general of WHO also fully affirmed it.

China thanks to the international community, including Japan, for its full understanding and support, he said.

Life is of paramount importance, Wang said. The Chinese government is committed to safeguarding the safety and health of the Chinese people, and will, in a responsible manner, safeguard the safety of every foreign national in China, including the Japanese expatriates, and address their legitimate concerns in a timely manner, he noted.

China will continue to strengthen communication and coordination with the international community and work together for epidemic prevention and control, Wang added.

Expressing appreciation for the efforts made by the Chinese side, Motegi said he believes that China will certainly be able to eliminate the epidemic at an early date.